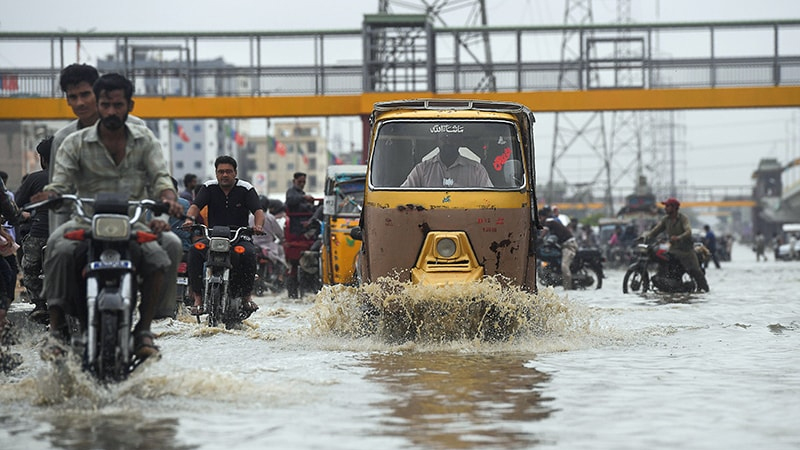 Four more people lost lives as rescue workers struggled to assist residents stuck in rain water and clear blockages amid fifth spell of the monsoon season in Karachi on Saturday.

The deaths of at least four persons, including two teenage boys, were reported in rain-related tragedies until the filing of this report. Sultan Karim and Shahnawaz Rashid, both 16, were killed after they were struck by lightning while working at a farmhouse. Saifullah Javed, 20, was electrocuted to death while switching on a water pumping motor in Machhar Colony. In Mominabad, 20-year-old Naveed was electrocuted to death.

Edhi volunteers used boats to rescue people stranded in different areas after heavy rains as their operation continued on Saturday. The city of lights plunged into darkness after heavy rains caused at least 600 electricity feeders to trip, leading to power outages in several areas of the metropolis. The Meteorological Department said that a system of clouds has started moving towards the port city from the east. The rain bearing system is currently looming over Karachi’s southeast district, it added. According to Director Meteorological Department Abdul Qayyum Bhutto, the city might receive 100mm of rain on Saturday. He that various areas in the city will either receive heavy or moderate rain showers. Bhutto said that the monsoon spell can last with intermittent rain showers until Wednesday, adding that heavy rains can cause urban flooding.

The K-Electric, the city’s sole power provider, has warned citizens to stay away from broken wires, electricity poles and PMTs. “Unsafe use of electrical appliances in rain and accumulated water can lead to accidents,” the KE added.

The district council on Saturday imposed ban on bathing in Malir river. A team of engineers inspected the damage and started survey for filling of a breach at Malir Spillway. It is to be mentioned here that recent spell of monsoon rainfall has caused flooding in Malir River and rising level of the water swept away the filter wall of the spillway. The breach in the dyke and flooding posing threat to Korangi industrial area and the adjacent population.

After sixth spell of monsoon began in Karachi yesterday, water level in Malir River is increasing.

A spokesperson of the Traffic Police has said that Korangi Causeway has been closed for traffic due to the rising water level. “The vehicular traffic from Mehmoodabad is being diverted towards Qayyumabad, while the traffic flow from Godown Chowrang being guided to Jam Sadiq bridge,” traffic police said.

Meanwhile, a meeting of the coordination committee of the federal and Sindh governments regarding Karachi’s situation was held to review efforts to clean the city’s drains. The meeting was attended by Sindh Chief Minister Murad Ali Shah and other provincial ministers, chairman Pakistan Metrological Department, federal ministers Asad Umar, Ali Zaidi and Aminul Haq, secretary planning and chairman of the National Disaster Management Authority. The meeting decided to remove encroachments in order to clear blockages in the nullahs, Sindh Minister for Local Government Syed Nasir Hussain Shah, who attended the meeting, said in a statement. He said work to remove encroachments where no people are residing will begin from Monday while arrangements will be made to move people living in illegal settlements on drains.