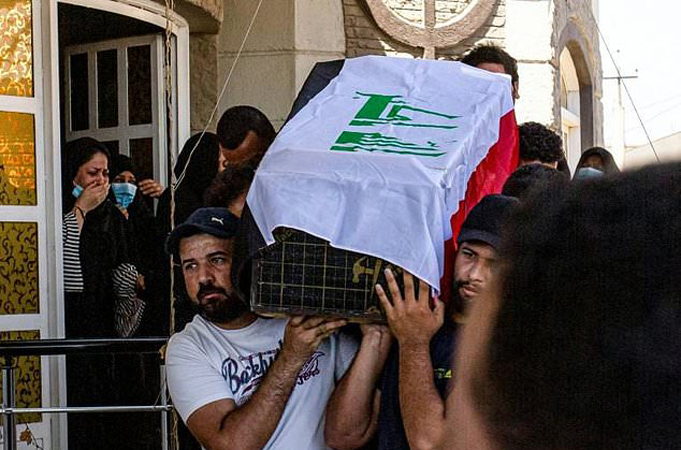 In under a week, two activists have been assassinated and three more narrowly survived murder attempts in southern Iraq, where tensions between pro-Iran groups and a Western-leaning government are claiming new victims.

One of them was Riham Yaaqub, a 29-year-old athletics coach who was deeply involved in anti-government protests and who was shot dead in the southern province of Basra on Wednesday.

The targeted killings sent shivers down spines in Iraq’s civil society, already deeply disturbed by the July killing in Baghdad of Hisham al-Hashemi, a government adviser and widely respected scholar on jihadism.

“The government and security forces have done nothing, but everyone knows the killers are the same… (they) killed Riham, Tahsin, and Hisham al-Hashemi,” said Ammar al-Hilfi, a prominent activist in Basra.

The list of victims is long: dozens of activists have been killed in Iraq in recent years, including during bloody protests in 2018 over a public health crisis in Basra that had put more than 100,000 people in hospital.

Then, in October, widespread rallies erupted across Baghdad and the south against a government seen as corrupt, inept and beholden to neighbouring Iran.

Still others were kidnapped, assaulted or threatened.

On Monday, three more activists in Basra — Ludia Rimon, Fahad al-Zubaydi and Abbas al-Subhi — were heading to the Shahmani family home to offer their condolences when a car full of armed men began firing at them.

The trio managed to escape, wounded and shaken but alive.

The city’s activist collectives have been left reeling by the sudden spree of violence.

“During the month of August, there have been six assassinations or attempted killings,” said Mehdi al-Tamimi, who heads the city’s Human Rights Council.

In total over the last year, Tamimi told AFP, the city has been hit by eight such murders and seven attempted killings.

Basra is oil-rich but infrastructure-poor: electricity grids, water networks and roads are some of the most badly maintained in the country and the rule of law is weak.

Yaaqub began speaking out during Basra’s 2018 protests, appearing on several media outlets despite limits on the public role of women in her conservative hometown.

Two years ago, she was targeted by an online smear campaign for having met with the US consul in Basra.

This week, online accounts began republishing a 2018 article from Mehr, an Iranian news agency close to Tehran’s ultra-conservatives, accusing Yaaqub and others of belonging to a “network woven by the Americans to target Iran in the region.”

Other activists, journalists and researchers have faced smears accusing them of links to Western embassies or intelligence services.

No group has officially claimed responsibility for the propaganda campaigns or the killings and authorities have yet to hold anyone to account.

But online accounts that appear to be supportive of Iran and its allies in Iraq have become increasingly bold in their threats to activists.

“It is unconscionable that the perpetrators of these horrible acts continue to act with impunity,” the US State Department said after Yaaqub’s killing.

The fight goes on

Yaaqub was killed just as top US diplomat Mike Pompeo was meeting his Iraqi counterpart Fuad Hussein in Washington, part of the first senior Baghdad delegation to visit the US in several years.

Heading the team was Iraqi Prime Minister Mustafa al-Kadhemi, who has struggled to fulfil his pledge to rein in powerful Tehran-backed groups who act independently of state forces.

Kadhemi was already reviled by Iran-backed groups, which have openly accused him of being a US “agent”, while their personnel have burned American flags as they stepped on portraits of the premier.

Immediately after ascending to the premiership in May, Kadhemi ordered the offices of one armed group in Basra closed, but efforts to silence activists continued.

“The government is weak compared to militias,” Hilfi said.

“But this will only make us more determined. Now, more than just demanding our rights, we will demand those of our martyrs.”