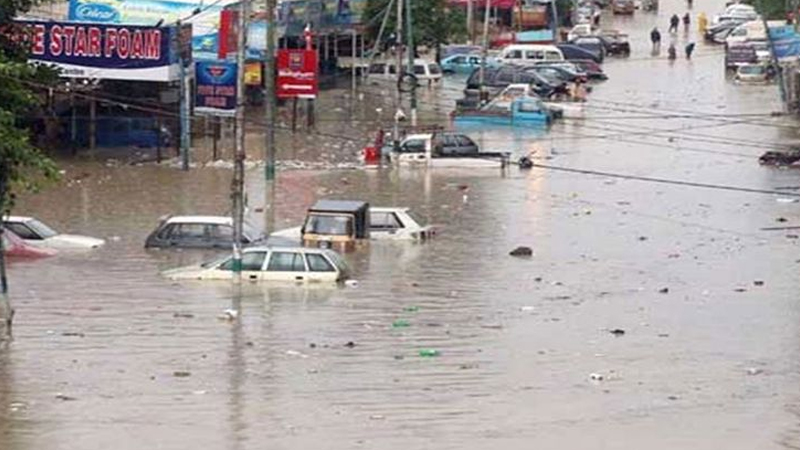 Another monsoon spell brought more devastation to Karachi on Friday, claiming the lives of three citizens and inundating roads in various parts of the city.

The rainfall also led to flooded roads and traffic jams as well as power outages continued to plague citizens of the port city. According to a private TV channel, several areas including Landhi, Korangi, Federal B Area, Shah Latif Town, Bin Qasim, Quaidabad and other received heavy rainfall.

Multiple roads, including Sharae Faisal – the city’s main artery – was flooded by rainwater, which disrupted traffic on thoroughfares in the apparent absence of pre-emptive measures. Queues of vehicles stretching up to 10 kilometres were witnessed in many areas, leaving commuters frustrated while several vehicles ran out of fuel, adding to the predicament.

The Pakistan Meteorological Department (PMD) has forecast thunderstorms and heavy rain in Karachi on Saturday as well. The weatherman, while issuing a report on monsoon rains, said apart from Karachi, other districts of Sindh are also likely to receive rainfall.

Meanwhile, four people died when lightning struck Tharparkur in Sindh. A woman in Thatta’s Idrees Ghubwani village died after being struck by lightning, police said. In Hyderabad, on the other hand, heavy rain brought the power system to a halt, with a Hyderabad Electric Supply Company (HESCO) spokesperson saying at least 60 feeders had tripped in the city.