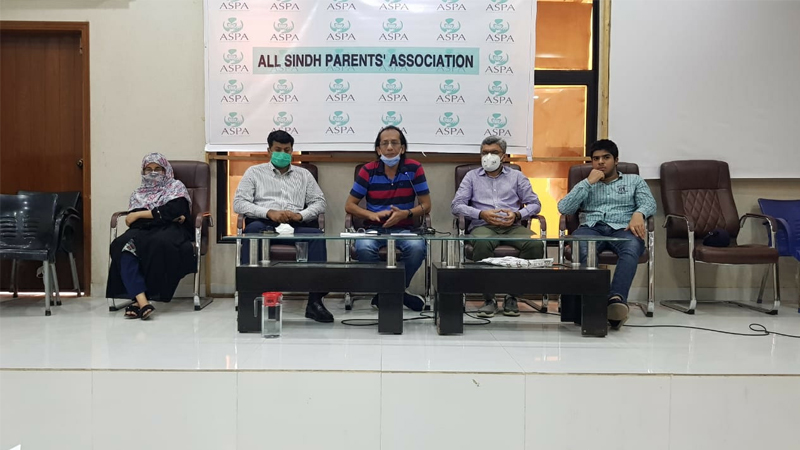 As a result of the situation caused by the global epidemic, the All Sindh Parents Association demands from the Government of Sindh that the Government should make arrangements for funds for the education on behalf of students studying in private educational institutes from its education fund or any additional funds, at least till the end of pandemic.

Furthermore, we are deeply grateful to all the schools who have implemented the Sindh Government’s ordinance to provide 20% discount in tuition fees. However, the owners and administrators of all those schools are highly reprehensible as they instead of following the said Ordinance they are still pursuing a policy of harassing the parents and have resorted to shameful tricks. We also demand that the Directorate of Inspection / Registration of Private Institutions, Sindh, Department of School Education and Literacy, a subsidiary of the government, should implement the Relief Ordinance and fully implement the Supreme Court and High Court Orders. Immediate action should be taken on the orders issued to them by the Sindh High Court in CP Number 2626/2020.

There are also many schools that are threatening not to promote their children to the next level if they fail to pay the fees, even for Cambridge they are threatening not to send the pre-requisite papers. The examination fee has already been collected though. Not only that, but there are threats to fire teachers as well as to expose children to these dangerous epidemics and to endanger the lives of children, teachers and non-teaching staff. The purpose of all these threats is simply to get the fee in one way or another, no matter even if the parents have to rob in these circumstances.

You are well aware that the largest numbers of parents whose children are being educated in private educational institutions belong to the lower or lower middle class.

Whether it’s a job or a small / large business, everyone is facing severe financial difficulties due to the closure of economic activities. In such unfortunate circumstances, all parents are awaiting the implementation of the aforesaid decision of the Supreme Court on behalf of the local governments, guardians and schools regarding the education of their children. Respected former Chief Justice Mr. SaqibNisar had issued orders to halve the summer fees and to reduce the fees by 20%, on which most of the schools have not complied with this order and blow away in the wind. Later, when the final decision was announced, it was interpreted to mean that it was an interim order that has now expired. The point is that this interim order, which was in force at thatpoint of time, had to be implemented in those schools and the parents of the children studying there are still deprived of the relief given by the Supreme Court.