‘A pandemic in a pandemic’: Coronavirus deepens racial gaps in America 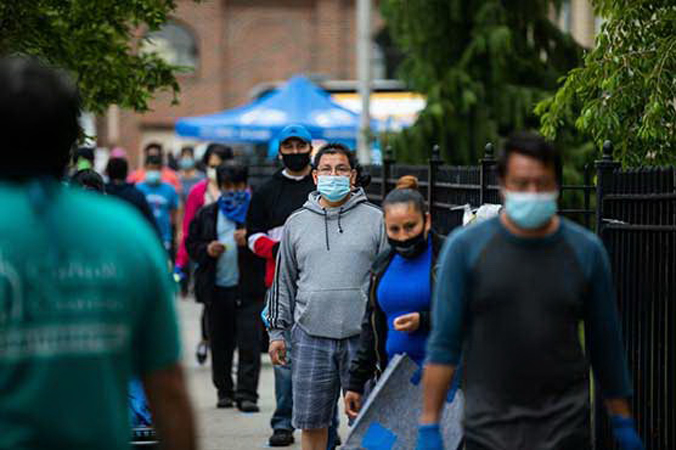 Jeannine Cook had only opened her Philadelphia bookstore for a few weeks when the coronavirus forced its closure, the latest in a string of obstacles for the Black business owner. Landlords refused to rent to her, and, like many Black-owned businesses, her Harriett’s Bookshop was too new and small to be eligible for a U.S. government Paycheck Protection Program (PPP) loan to help small businesses weather the COVID-19 setbacks.

“Do I think there’s prejudice and institutional racism? I think that’s 100% sure we know that,” she told the Thomson Reuters Foundation. “The thing about racism is that it hides, and it’s very covert, and so it’s able to live in the shadows.” Often unwelcomed by mainstream financial institutions and facing racist practices in business, Black Americans have suffered financial inequality for decades.

Confronted by racist hiring practices, Black Americans historically have been shunned from the best paying jobs and lack the generational wealth often available to white Americans.

And the inequality is worsening. According to U.S. think tank the Brookings Institute, the gap between white and Black family wealth is higher today than it was at the start of the century.

“Being Black in America is hard,” said Dexter George, who turned to online fundraising to keep his Source of Knowledge bookstore in Newark, New Jersey, from closing due to the pandemic after more than two decades.

“But being Black in business is even harder.”

Now, along with higher rates of hospitalization and death due to COVID-19 than their white peers, Black Americans are being hit harder by the pandemic’s economic fallout, losing jobs, businesses and opportunities for advancement.

“COVID-19 is a pandemic within a pandemic for Black people in this country,” said Jennifer Epps-Addison, co-executive director of the Center for Popular Democracy, a U.S. advocacy group.

“The racist systems in America … that have regularly failed Black people for generations, are now less reliable amid this pandemic.”

In July, Black unemployment was 14.6%, government data showed, while the joblessness rate for whites was 9.2%, a gap of 5.4 points.

This was the widest gap in jobless rates between Black and white Americans in more than five years, according to the Labor Department, exposing a critical economic aspect to inequality at a pivotal moment in U.S. race relations.

‘WE ARE IN EXTREME CRISIS’

Efforts at moving stimulus money into the battered U.S. economy has hit an impasse, with the Republican-led Senate and Democratic-controlled House of Representatives in an informal recess.

Their negotiations are wide apart – the Democrats’ proposal is $3 trillion and the Republicans´ is $1 trillion, with gaps in proposed funding for schools, state and local governments and unemployment benefits.

“We are in extreme crisis. I think we are in a greater crisis than at any time in the 21st century,” said Marc Morial, president of the National Urban League, a top civil rights group.

“We’ve lost ground when it comes to home ownership, substantial ground, and with the economic crisis that undergirds the situation, it is likely that the Black home ownership rate will decline even further.

“The coronavirus unmasked many factors, many problems, many issues, many disparities that people ignored, chose to ignore or chose to be indifferent about.”

The vast gap is rooted in a system of housing discrimination called redlining, a government classification system from decades ago that discouraged banks from lending in Black neighborhoods by identifying them as too risky for investment.

As the economic and public health crises collide, Black Americans fear the worst.

Jamie Collins, who lost her information technology job due to the coronavirus, said potential employers see Black people as more likely to get sick from COVID-19, making them a liability.

“I don’t think anyone wants to hire us anymore,” she said. “We, as Black people, are now considered risk hires, and that´s how it´s going to be because COVID is not going away.

“I have to work 10 times harder so I can prove my worth, and I’ve always had to do that. But with COVID, it’s just like I don´t even get to prove it now.”

‘BACK FROM THE STARTING LINE’

For many Black business owners, the hurdles are laid out from the beginning.

More than half of Black business owners did not receive the amount of funding they requested from banks or other financial institutions, compared with about a quarter of whites, according to a 2018 study by the U.S. government’s Small Business Administration.

Almost half of African-Americans said they did not receive the full amount they requested from home equity loans, compared with just over a quarter – 27.5% – of white applicants.

“Getting funding, getting a loan, Black-owned businesses are already 100 feet back from the starting line,” said Mapate Diop, co-owner of a clothing store called Diop in Detroit.

A lack of generational wealth is also a significant barrier, said Marvin Owens Jr., senior director of the economic department of National Association for the Advancement of Colored People, a civil rights group.

“Where do you get the down payment when you’re already in a situation where the wages are low or you can’t go to a parent to help you out?” Owens said.

In New York City, Ouigi Theodore, who runs Brooklyn Circus, a style and clothing store, said he sees the difference between white- and Black-run businesses as those who get a cultural pass, and those who don’t.

He said Black businesses and Black entrepreneurs don’t get as many opportunities to stumble.

“We get one shot. If I get in trouble for something, I’m forever that guy.”

Generational support is lacking as well, he added.

“My grandmother does not have the savings to invest in my business,” he said. “When you’re launching, it is what it is.”

Racism in banking and lending reared its head during the subprime mortgage crisis leading up to the 2008 recession, said Jacob Faber, associate professor of sociology and public service at New York University.

“We saw widespread discrimination there, which resulted in fully erasing the home-ownership gains since the Civil Rights era among African-Americans,” he said.

Faber said the finance industry had long been a driver of racial inequality, with banks less commonly found in communities of color than in white communities.

The 2008 financial crisis made such barriers even tougher.

Before the 2008 crisis, the average Black family earned 64% of what a white family brought home, according to U.S. government data. More than a fifth of Black people in 2008 earned less than $15,000, double the share of whites.

As the crisis hit Black unemployment soared to 16% in 2009, while not quite reaching 9% among white workers.

“We’re still trying to rebuild from that crash,” said the NAACP’s Owens.

“When your margins are razor-thin, a downturn can affect your ability to remain stable, and the sense of instability is just palpable in our community.”

After June, the number of Black-owned small businesses was down 19%, compared with 5% of white-owned businesses, according to the research, published by The Pew Charitable Trusts, a public policy nonprofit.

Andrea Powe of Atlanta lost clients in the 2008 crash. Now, she’s been waiting since June for a small business PPP loan to support her hair studio and A Concrete Rose Production company with 17 employees.

“I don’t think I’m going to make it through right now. I had all the hope in the world because I´m not a quitter. But right now, with no PPP, no money, and if we go on another lockdown, I don´t know,” she said.

“When you have a lot of people that count on you, it wears heavy. It wears you really heavy.”

Black women earn 62 cents for every dollar earned by white men, according to Equal Pay Today, an U.S.-based project that measures gender and racial pay gaps.

That amounts to nearly $1 million in lost income in the career of a Black woman, according to LeanIn.org, a U.S. women’s advocacy group.

With the economic gap between Black and white likely to widen amid the coronavirus crisis, some communities are looking for their own solutions to financial racial inequality.

“The dream has always been to organize the buying power of Black Americans and our allies so we can use money as a tool to allow us to accomplish our political and social goals,” he said.

A Black lender or a Black bank would not look at a customer in a racist way, he said.

At the bookstore in Newark, George imagines a new Black Wall Street offering credit, loans and other financial investments to support Black businesses.

He described being turned down by a bank for a pass-book loan, a system in which a bank will extend a loan using a customer’s savings deposit as collateral.

A bank rejected his request for a loan, even with $45,000 in his savings account, he said.

“I walked out of the bank so disappointed, so heartbroken,” he said.