On the diplomatic front and in foreign relations strategy today Pakistan stands in a Catch 22 position when seen in the perspective of her relations with the Arab countries especially the Kingdom of Saudi Arabia. The news of UAE’s getting into an agreement with Israel has further complicated the situation of Pakistan, its being said that Bahrein and few other Arab countries will follow UAE in establishing diplomatic relations with the Jewish state. 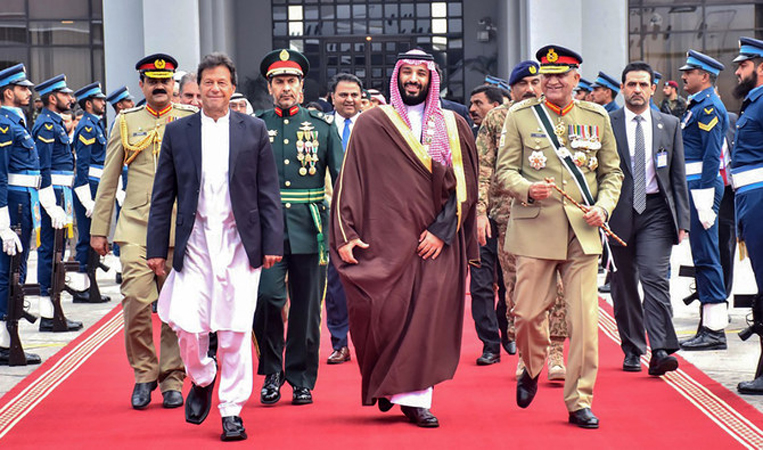 Along these changing scenarios on the international diplomatic horizon, Pakistan is deeply perturbed and disturb because of the happenings in the Indian held Kashmir. The Muslim world in general and the Arab countries in particular are simply a salient spectator to all the gross human rights violations and brutalities in IHK by the Indian forces. This complete silence on the part of the Muslim Ummah is not only a painful act but is deeply hurtful for all the humanity living nations, distinctively if seen in the light of Pakistan’s wholehearted help and support to the suppressed community all over the world particularly to the Muslim world with a specific reference to the Palestinian cause, despite having very limited resources, Pakistan had always been standing behind the Muslim world. Pakistan’s foreign minister’s interview to a private TV channel was bold, audacious and courageous, which was the need of hour. There can be no second opinion that now is the time when the government of Pakistan takes a firm stand on the issue of Kashmir with respect to the support of the world community especially the Muslim world. There were times when almost the whole Muslim World strongly supported Pakistan on the issue of Kashmir. The September 1965 war between the two countries brought almost the whole Muslim world on one page categorically supporting Pakistan on the issue of Kashmir, it’s an open secret now that even the PAF planes were allowed to use Iran’s air basis for refueling etc, the late president of Indonesia Dr. Sukarno, had offered complete assistance offering to put his entire naval force at Pakistan’s disposal, with the exception of Egypt the entire Muslim world was standing at the back of Pakistan, including Saudi Arabia. This support of the Muslim World was reciprocated by Pakistan always especially during the Israel-Arab war of 1967.

At the first Islamic conference in Rabat, September 1969, when Pakistan objected to the participation of an Indian delegation, led by Fakharuddin Ali Ahmed, Indian minister of industrial development, and refused to attend the concluding session, he was declared Persona non grata. Initially, Pakistan had not objected on extending an invitation to India, but on a second thought the than President of Pakistan, Gen Yahya Khan, leading the Pakistani delegation in the conference, realized the consequences of getting India into the folds of Islamic countries and took a firm stand of quitting the conference which was to be followed by many countries like Iran, Jordan, Turkey and many more, Pakistan had that sort of value and respect in the Muslim world.

The second Islamic conference in 1973, held in Lahore, was attended by almost all the Muslim world leaders, and the conference was a great success raising the status of Pakistan in the eyes of the Muslim countries as the leader and spokesman of the entire Ummah.

When most of the Arab countries were simply deserts, with no infrastructure, Pakistan offered all sorts of technical and manpower help to the Arab Muslim brothers. Things started changing with the discovery of huge quantities of oil and gas reserves in the Arab world and political crises and chaos in Pakistan. On the other hand India availed and cashed the opportunity, because of her strong democratic institutions and developments in all fields, got closer and closer to the Muslim world especially with the Arab world despite having diplomatic and trade relation with Israel a country with which most of the Arab countries did not have even diplomatic relations at that time.

Pakistan not only failed miserably on the domestic front but on the diplomatic front also the policies adopted by the foreign office resulted in alienating Pakistan, providing a free hand to India. There had been even times when Pakistan was left on the mercy of foreign office only with no foreign minister at the help of affairs , the sitting prime minister keeping the important portfolio of foreign affairs with himself thus causing severe damage to the foreign policy of the country.

In April 2018, the Turkish President Recap Tayyab Erdogan delivered a hard hitting speech calling Israeli minister Benjamin Netanyahu terrorist after the Israeli prime minister rejected Ankara’s “moral lessons” over deadly clashes in Gaza. Mr. Erdogan said “Hey Netanyahu ! You are an occupier, and it is an occupier that you are on those lands. At the same time. You are a terrorist”. All those having a tender and soft heart in their body with love for humanity definitely without an iota of doubt would agree with the bold and courageous statement of the Turkish President who had spoken on the behalf of not only the Muslim world but the entire peace loving citizens of the world. Almost same type of atrocities, killings and brutalities are taking place in the Indian held Kashmir, while the Indian Prime Minister Mr. Narminder Modi is acting worse than a terrorist, but unfortunately the whole world is a silent spectator to these enormities and the killing of innocent Kashmir’s which is now an order of the day. Why the world especially the Muslim world is having double standards a separate for Israel and entirely opposite of it for India. Both the countries are occupiers, Israel of Palestine while India of Kashmir, both the countries are treating just one segment of citizen’s worse than animals but in case of Kashmir never any world leader has spoken or used the strong words as Mr. Erdogan used for Israel and her prime minister.

What the foreign minister Mr. Qureshi said in the TV talk show was definitely not a threat or challenge to Saudi Arabia, a country with which every Pakistani is deeply and emotionally connected with and is even willing to sacrifice his life for the integrity and independence of the KSA, but was the voice of millions of humanity loving people around the globe, as is said it’s never too late, such a stand Pakistan should have taken much earlier, a firm stand as was taken at the first Islamic conference, but for one reason or the other successive Pakistani governments restricted themselves just to hard hitting speeches at UN general assembly and other international forums or condemning India in the routine foreign office briefings. FM Qureshi’s demand that “Riyadh show leadership on the issue” is bona fide and unquestionable which must be taken seriously and earnestly by the Saudi government. As disclosed by minister Qureshi, on the request of Saudi Arabia, Pakistan skipped the Kuala lumpur conference, thus annoying our friends Turkey and Malaysia.

The recent visit of COAS Gen Bajwa to the KSA would definitely result in removing the misunderstandings if any between the two countries after the statement of FM Qureshi and the Saudi government will come up openly in supporting Pakistan on the issue of Kashmir. If the OIC still turns a deaf ear than definitely Pakistan is left with no option but to enter in a new alliance of Muslim countries outside OIC, as was previously the case of RCD, which was an alliance and organization of three very important Muslim countries, Pakistan. Iran and Turkey. This is practically the situation of now or never. If we strict to our principal stand the Muslim world would definitely be compelled to review and reconsider their policies towards India compelling her to stop the bloodshed of Kashmiri people and to come on negotiating table.

The writer is ex-marine engineer and can be reached at aamiraqil@gmail.com