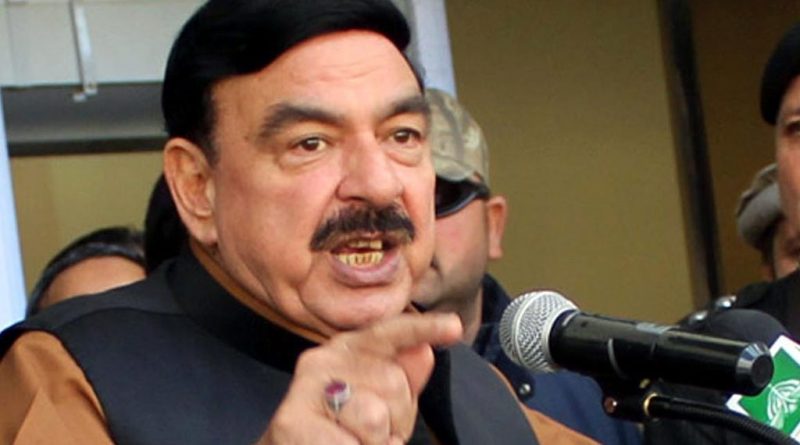 Minister for Railways Sheikh Rashid Ahmed on Thursday said that the present democratic government and military leadership were on the same page with respect to issues of national interest and enjoying good working relations.

“The elected government of Pakistan Tehreek-e-Insaf (PTI) and military leadership want to move forward together to resolve all the challenges confronting the country,” he said addressing a press conference here. The minister said Prime Minister Imran Khan was working hard for poverty alleviation, job creation to unemployed youth and putting the country to the right direction. Sheikh Rashid said the present government would complete its tenure and this year would be an exemplary that would bring prosperity and progress in the country. He said that all political leadership of Pakistan Muslim League-Nawaz (PML-N) and Pakistan People’s Party (PPP) were facing National Accountability Bureau (NAB) trial.

The minister said that Imran Khan could take any decision in favour of the country but could not give National Reconciliation Ordinance (NRO) to the opposition for the satisfaction of their own desires. He said Leader of Opposition in National Assembly Shehbaz Sharif and Leader of Opposition in Provincial Assembly Punjab Hamza Shahbaz were facing serious charges of corruption. Sheikh Rashid predicted that many of the leaders in both the parties including PML-N and PPP were appeared to be disqualified in near future. Nobody asked from Marriyum Nawaz that why she was remained silent for the last one year, he questioned, adding that Marriyum Nawaz would ruin its party as she damaged her father Nawaz Sharif repute. He said Prime Minister Imran Khan had made a clear statement about Pakistan’s stance on relations with Israel.

Talking about relations with Kingdom of Saudi Arabia, he said that affairs and security of Pakistan and KSA were interlinked. Sheikh Rashid said that Pakistan and China were enjoying cordial relations and their friendship was higher than Himalaya and deeper than oceans. The minister said that he had earlier predicted that All Parties Conference (APC) would not be convened and aspiration of the opposition would not fulfill. About the two years performance of Pakistan Railways, he said that approval of ML-1 project depicted the seriousness of present government; however, coronavirus outbreak in the country had affected train operations across the country. “After the British era, Imran Khan’s government is giving a new life to Pakistan Railways,” the minister added.

Sheikh Rashid said the economy of the country was getting strengthened owing to the prudent policies of the present government. He said issues pertaining to sugar and wheat would also be resolved soon. The minister said Main Line-I (ML-I) project would provide employment opportunities to over 150,000 people as 90 percent labour and technical staff would be hired from inside the country. The project, biggest ever in the history of the country starting form Karachi and culminating at Peshawar would not only decrease unemployment in the country but would also boost the country’s economy, he added. He said the Executive Committee of the National Economic Council (ECNEC) had approved the up-gradation of existing ML-1, 1780 kilometer and after completion, the train would run on the upgraded track at the speed of 160 kilometers per hour. Sheikh Rashid said the railway track was built in 1861 and due to its dilapidated condition it increased incidents but now the track was going to upgrade that help mitigate railways mishaps. “ML-I credit goes to the Pakistan Tehreek-i-Insaf (PTI) government and after its completion the number of passenger trains will also be increased from 34 to 140,” he added.

The minister said under the project that cost $6.80 billion would turn the existing one line into a double-track route to provide safe journey to the railways passengers. He said the track was being upgraded on modern techniques that would allow trains to run at the speed of approximately 160 kilometer per hour. The track may also have the capacity to increase more speed in the future. During the up-gradation of ML-I, the existing track available in good condition would be utilized for the rehabilitation of other branch lines across the country. The entire project would be carried out by Pakistan Railways engineers in collaboration with Chinese engineers, he maintained. He said that fencing would be ensured to secure the track and all the level crossings would be converted into flyover and underpasses besides upgrading signalling system to avoid the accidents.

The minister said the construction work on ML-I would be initiated soon after floating its tender by the end of this month and hopefully it would be completed in five years in three phases. He said that laying of track of Karachi Circular Railway (KCR) would be completed this year end which due with Pakistan Railways and urged the Sindh Government to complete its work as soon as possible.