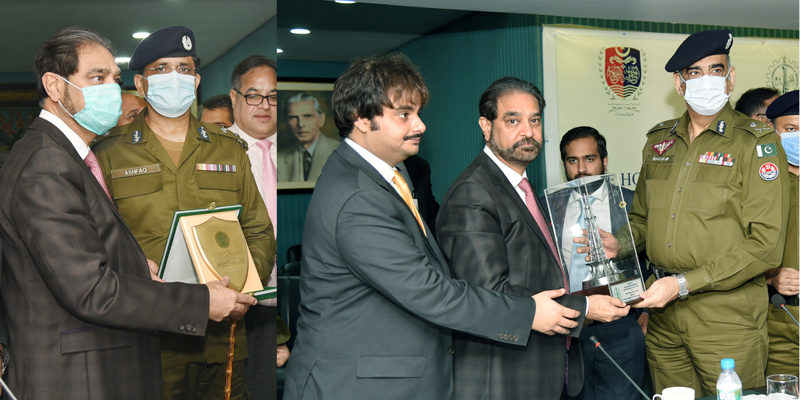 The Police Punjab inspector general (IG) said that provision of peaceful and compatible environment for business activities and resolution of issues of business community on preferential basis is among top priorities of Punjab Police and in this regard every possible steps shall be taken with mutual consultation of business community and other stakeholders for improving law and order so that police may be playing its effective role with community policing in running of wheel of economy.

He further said that business community has been playing role of development and construction by their economic activities therefore Khidmat Markaz has been established in Lahore Chamber of Commerce for their facilitation so that they do not face any difficulty for acquisition of necessary documents of business matters. He further said that it is a matter of great satisfaction and happiness that from this Khidmat Markaz, not only business men but also common citizens shall take benefit. He moreover said that, cooperation of business community under Public Private Partnership for safe City, model police station and other projects is the need of time by which both institutions may improve the services for public. He further said that, one third vehicles under the use of Istanbul Police has been provided by business Community of Turkey and we do not need vehicles but need such behaviour and attitude because it will not only enhance police performance but also strengthen the state. He further added that state cannot take the responsibility of each and every thing and we ourselves have to fulfil our responsibilities and obligations. He further said that ,for facilitation and service of citizens, network of Khidmat Marakiz have been established in all over the Punjab including Lahore.

These views were given by him when he was responding to media personnel during his visit at Lahore chamber of commerce and industry. President of Lahore chamber Irfan Iqbal Sheikh paid thanks to IG punjab for establishment of khidmat markaz and said that trade community now considers itself more secured and safe as compared to the past and our business activities are being fulfilled without any trouble.

He paid homage to eternal sacrifices of Punjab Police in a war against corona pandemic and terrorism and said that officers and officials of police have always performed a role of front line soldiers in every difficult time and solidified the future of this nation by sacrificing their lives for peace, stability and solidarity of state,upon which police force is really plausible and appreciable. He further said that business community shall definitely fully cooperate for establishment of model police stations and also extend cooperation and help and ownership for projects of modern policing. He added that, from business community, modern surveillance system for monitoring of CCTV cameras shall be established in markets of Lahore which will also be integrated with central monitoring system of Safe City Lahore so that mechanism of monitoring and elimination of crimes may be improved. Senior Vice president Ali Hassam Asghar apprised about the issues of business community and told that DPO Shiekhupura should be directed to clinch the necks of criminals in Mureedkay and Sheikhupura and also improve police patrolling as well. He added that professional beggars mafia restrict business activities in markets and qucik steps should be taken to get rid of them.

Vice president Mian Zahid Javed Ahmad said that steps of police for maintaining smooth flow of traffic on busy roads of markets is appreciable. He further said that establishment of an effective and functional coordination Committee for improving coordination between police and traders is an important need of time. He also emphasised upon taking strict steps for stopping of aerial firing and street crime. IG Punjab ensured caretakers of chamber of commerce and said that every possible steps shall be taken for resolution of problems of business men.