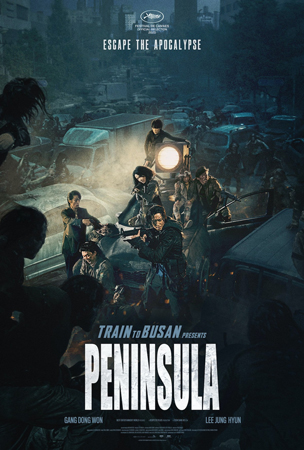 Since Bong Joon-ho’s Parasite hit the jackpot at this year’s Oscars, all eyes are on South Korea as a new film hub.

That piles expectations on Peninsula, writer-director Yeon Sang-ho’s follow-up to 2016’s Train to Busan, his surprise smash about zombies who crash a ride on a bullet train where even traveling first class earns you no perks from the walking dead. That film and its animated prequel Seoul Station, released the same year, served as a cutting critique of the class system that divides society into haves and have-nots. So did Bong’s 2013 Snowpiercer in which a train became a microcosm of societal ills – minus the zombies.

The dead start walking again in Peninsula, which has been retitled Train to Busan Presents: Peninsula for its US release on August 21, perhaps for commercial reasons, or just to remind audiences that they loved the original. That idea could backfire since Peninsula, though it has its share of exciting moments, can’t hold a candle to its predecessor in terms of originality and impact. Yeon sets his new film four years later in the decimated port city of Incheon. Why? As exposition, Yeon asks us to listen in on a talk show in which a scientist tells us that the zombie virus which started in a bio-factory in South Korea has spread north to the Korean peninsula, where the government has lost all control. The Covid parallels are hard to miss.

The focus this time is on Jung-seok, a soldier who is trying to get his sister, her husband Chul-min and their son Dong-hwan to a ship at the port of Incheon. In a rush to safety, Jung-seok drives past a family begging for rescue, a decision he will come to regret. When the virus spreads onboard their ship, Jung-seok and Chul-min are the only survivors, living as pariahs in Hong Kong, as neighbouring countries refuse to accept them as refugees. The only hope for the two men is accepting an offer from mercenaries to return to their now-decimated homeland and retrieve 20 million US dollars from an abandoned truck. The catch: the truck is crawling with the undead. It’ll be no problem, say the mercenaries, falsely claiming that zombies are blind at night. All the two men need to do is grab the loot, use their satellite phone for a ship pickup, and they’re home free.

The best laid plans, right? Everything that can go wrong does. For Jung-seok and Chul-min, the zombies turn out to be the least of their problems next to the human villains of Unit 361, led by the suicidal Capt. Seo and the scheming Sgt. Hwang. These corrupt souls and their followers compete in sadistic games that are worse than anything the undead can cook up. And they have an eye on our two heroes as their latest victims. At this point, Yeon morphs Peninsula from a World War Z-style zombiefest into a Mad Max head-banger adventure with cars and trucks racing and crashing in a deadly derby of mayhem. Remember that family Jung-seok refused to save at the beginning? Suddenly they all figure in the action.

Got all that? It’s unlikely you’ll care much if you don’t. Though Yeon can still deliver memorable frights, like the car horn that literally does wake the dead, he can’t decide what kind of movie to make. So he does a genre mashup, tops it with a sappy ending, and hopes for the best.