10 iconic TV shows from the West that will forever be on your binge-list! 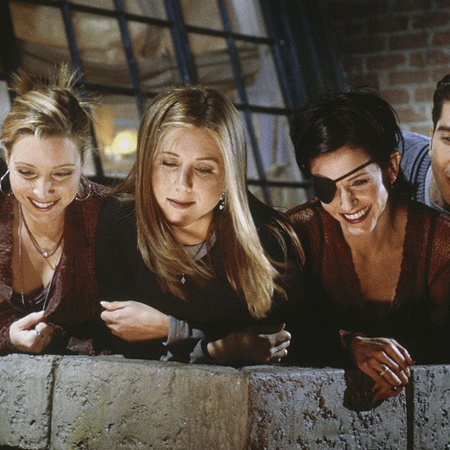 Does staying home and spending time together with family during the lockdown remind you of the old days when everyone would come together sharing a laugh or getting emotional watching some of the most iconic TV shows?

Television holds a special place in viewers hearts as they bring us closer as a family where we often spend an hour a day enjoying this pleasant experience together.

Let’s revisit them and look back some evergreen shows that are sure to make us emotional.

‘FRIENDS’ — it’s truly next to impossible to imagine a world without F.R.I.E.N.D.S. A show that had the world take sides with just one dialogue, “We were on a break”, is one worth a mention. Who would’ve thought that ‘lobsters’ indicated eternal love or the phrase ‘Oh My God’ literally has a ring to it? From Joey’s ‘How You Doin?’ to Ross’ grammar Nazi side, from Pheobe’s ‘Smelly Cat’ to Monica’s borderline OCD and from Chandler’s sarcastic self to the enchantress Rachel – we wouldn’t have it any other way!

‘THE BIG BANG THEORY’ — for more than a decade our favourite quartet of socially awkward scientists, Sheldon, Leonard, Raj, Howard and their ingénue neighbour Penny have entertained us thoroughly with science and funny anecdotes about superheroes, life and love. “The Big Bang Theory” explained as the ‘Sitcom Theory of Evolution’ has given us many amusing moments that made us fall in love with science, all over again. Admit it – haven’t we all hummed ‘Soft Kitty’ or found ‘that spot’ on the couch that’s ours? That’s the magic of unravelling the mysteries that all started with a big bang!

‘FULL HOUSE’ — the Tanner family – a household name that had us in splits with their antics! The meticulous widower Danny and his little girls D.J., Stephanie, Michelle, along with their goofy Uncle Joey and the charming Uncle Jesse made for a perfectly imperfect family of misfits that was always up to some nuisance. ‘Full House’ is one show that brought together the young and old alike in enjoying we-time over some good laughs!

‘TWO & A HALF MEN’ — two brothers and an ever-so-curious teenager lad make for the perfect recipe for a disaster! As the terrific trio Charlie, Alan and Jake engaged in their daily dose of cheap thrills, the world came together to witness the madness that followed! A show that gifted the world with Charlie, a man full of himself and known for his carefree satirical take on life, truly had us hooked from the word go.

‘SEINFELD’ — “Hey, Reilly! The zoo called. You’re due back by six.” Quips Jerry, the ultimate king of comedy and comebacks! What could be better than witnessing the stand-up legend crack you up with witty one-liners? “Nothing!”. The greatest TV sitcom of the 90s, Seinfeld is one show that ditched the rulebook and redefined television for decades to come with its quirks and ability to mine laughter out of everyday mundane scenarios.

‘WILL & GRACE’ — what would you expect to get served, when you order for a gay lawyer and a cynical Jewish woman? A humorous take on two best friends’ dependence on each other for moral and emotional support in the most peculiar situations is what makes ‘Will & Grace’ a fan favourite even today. The camaraderie and chemistry between Jack and Grace is what won the hearts of many for this timeless sitcom.

‘HOUSE OF CARDS’ — the most successful political social drama that features the likes of Kevin Spacey and Robin Wright in titular roles made for the most-awaited and gripping series of our times! A series that showed how politics is a game played by scheming people vying for the power and the highest seat in the round table garnered immense acclaim from critics and fans alike. The end of every season is one nail-biting cliff-hanger that keeps you eagerly looking forward to what lies in store next.

‘GREY’S ANATOMY’ — we have seen them save countless lives, live through complex relationships and even survive a plane crash! A show all about love, pain, joy, anger and sorrow, Grey’s Anatomy has truly turned our hearts to mush over the past decade, tracing the lives of the charming surgeons from Grey Sloan Memorial Hospital.

‘SUPERGIRL’ — television’s first-ever red-caped female superhero is one who truly made her presence felt! Set in Arrowverse, Supergirl this fearless cousin of the legendary Superman has carved her own path in fighting all evil with her phenomenal powers. A series that puts friendship to test, brings the most dangerous villains and unleashes the ultimate powers of Supergirl has had fans hooked on Zee Café as they witness the show ‘Along With The US’.

‘THE VAMPIRE DIARIES’ — here’s a terrifying and award-winning drama series that largely garnered a large teen following that made young heartthrobs fall head over heels with them pale smooth jaw-lined blood-sucking vamps. The Vampire Diaries was an instant hit with viewers in the country as they ventured into the town of Mystic Falls, one that was clouded in mystery and horror!