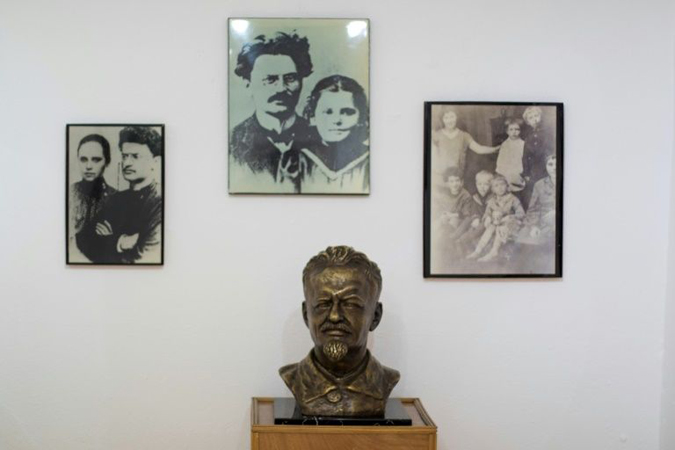 Bullet holes still pockmark the walls of the house in Mexico where Russian revolutionary Leon Trotsky was brutally murdered 80 years ago, a reminder of an earlier failed assassination attempt.

“I’m already familiar” with death, Trotsky said after he survived that attack in his home in a suburb of Mexico City where he spent his last years in exile.

“I’ve been followed by the black hatred of Stalin across half the world,” he told a Mexican newspaper.

Months later, on August 20, 1940, that trail of persecution finally caught up with him when he was killed with an ice axe by an assassin acting on Joseph Stalin’s orders.

“It was an ideological, symbolic crime,” Cuban writer Leonardo Padura, who spent years researching the murder for his novel “The Man who Loved Dogs”, told AFP.

Trotsky’s house in the leafy neighborhood of Coyoacan has been preserved as a museum, where his grave is marked by a tombstone engraved with a hammer and sickle in the compound.

The watchtowers, high walls and bullet holes left by Stalin’s hit squad offer an insight into how the key figure in the Bolshevik revolution spent his final days.

Born Lev Davidovich Bronstein, Trotsky was the founder of the Red Army and, along with Vladimir Lenin, one of the prime movers in the Bolshevik revolt that overthrew Tsar Nicholas II.

After falling out with Stalin in the 1920s, Trotsky was forced into exile.

The Marxist revolutionary drifted from Turkey to Norway to France before finally landing in Mexico in 1937, where the muralist Diego Rivera helped to persuade General Lazaro Cardenas’s government to grant him asylum.

Paradoxically, Trotsky and Cardenas never met, although they exchanged letters.

“Probably it was due to the circumstances of the moment, because there was no need to meet,” the general’s son Cuauhtemoc Cardenas, himself a prominent politician, told AFP.

Accompanied by his wife Natalia Sedova, Trotsky was welcomed at the port of Tampico by the painter Frida Kahlo, with whom it is rumored that he had an affair.

“Upon his arrival, he mixed with a group of characters who coincided in those moments in an explosive Mexico, starting with Rivera and Kahlo,” said Padura.

But even on another continent the revolutionary was not safe from Stalin’s regime.

Trotsky and his wife survived the first attack on May 24, 1940 by throwing themselves under their bed.

Their grandson, who slept in the next room, suffered a foot injury.

The incident led Trotsky to increase security at the compound, but it was not enough to stop his assassin, Ramon Mercader.

A Spanish communist and secret agent for the Soviet intelligence services, Mercader managed to infiltrate Trotsky’s inner circle as the lover of a New York Trotskyite.

After Trotsky installed a new metal gate at the entry to his compound controlled by guards, Mercader gave up on the idea of using a gun.

Instead the experienced mountaineer chose an ice axe, to maximize his chances of escaping.

Armed with a backup pistol and knife under his coat, he entered the compound and plunged the axe into Trotsky’s skull.

Trotsky, gravely wounded, shouted for help and Mercader was captured.

The revolutionary died at a Mexico City hospital the next day.

The murder weapon disappeared later that year but resurfaced decades later when the daughter of a policeman offered it for sale, saying she had kept it under her bed for years. The axe was bought by Keith Melton, an espionage historian for the CIA, and is now on display at the International Spy Museum in Washington.