‘Tesla’ — a postmodern biopic for a modern genius

* It's Anne who tells us which scenes are made up, starting with an ice cream fight between Tesla and Edison 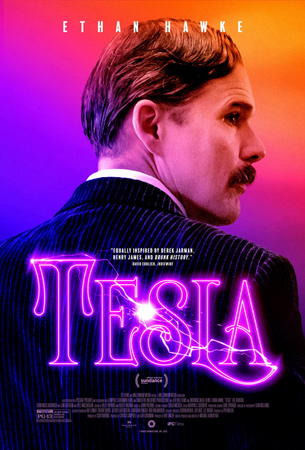 If you want to be bored breathless by how Serbian inventor Nicola Tesla figured into the feud between Thomas Edison and George Westinghouse over direct and alternating currents, try 2019’s The Current War.

It’s biopic trolling at its dullest. Or you may want to consider Tesla, which is both a corrective and a mesmerizing showcase for Ethan Hawke, playing the futurist who harnessed AC to light the eventual spark for our contemporary wireless world. Google searches, a Macbook and a cellphone make anachronistic cameos as Tesla mixes it up with Thomas Edison, George Westinghouse, JP Morgan and Morgan’s headstrong daughter Anne.

It’s Anne who tells us which scenes are made up, starting with an ice cream fight between Tesla and Edison. And as the film’s narrator, she’s also the one warning us about the flights of fancy that will mark the approach of visionary writer-director Michael Almereyda. A similar technique of merging past, present and future runs through Radioactive, Marjane Satrapi’s unconventional biopic of pioneering scientist Madame Curie, played by Rosamund Pike. No matter. Almereyda goes his own defiant way.

The same goes for Hawke, who plays Tesla as man lost in his own clamorous mind, too far ahead of the world he was born into to waste much time with such distractions as marriage and family

The same goes for Hawke, who plays Tesla as man lost in his own clamorous mind, too far ahead of the world he was born into to waste much time with such distractions as marriage and family. Back in 2000, Almereyda and Hawke combined their adventurous spirits in a modern-day take on Hamlet, set in corporate Manhattan with MacLachlan as Claudius, the media-king stepfather to Hawke’s melancholy indie filmmaker. Make what you will of the parallels between Hamlet/Claudius and Tesla/Edison. The fun here comes in watching Almereyda/Hawke twist the familiar into provocative new shapes.

Anne keeps her laptop handy to show how Tesla, who died broke, would impact the future and interact with the greats and near-greats. MacLachlan is outstanding as the scheming Edison, an envious bully who is more an exploiter of Tesla than a mentor. Unlike Edison, Morgan and Westinghouse, Tesla is not interested in building his brand and accumulating a fortune. Fame, as represented by the legendary actress Sarah Bernhardt, holds no allure. How sad, Anne tells us, that Tesla is still not the internet star Edison is. Hewson, daughter of U2’s Bono, is a gifted Irish actress with just the playful spirit the film needs. Though Anne’s love for the inventor remains unrequited, she still has the power to occasionally lift him out of his moods. Science is his real passion, which we’re shown early on when Tesla rubs the back of his cat and sees an electric charge run along its fur. “Is nature a gigantic cat?” he asks. “And if so, who strokes its back?”

The gifted cinematographer Sean Price Williams shoots his subject from odd angles and against painted backdrops that emphasize the film’s artifice instead of disguising it. And the electronic jangle in the score by John Paesano is also meant to knock us off balance, to upturn conventions like Tesla did. The result is a striking film that frustratingly never coheres but still holds you in thrall.

There’s a liberating moment in 1893 when Tesla, enjoying the triumphant moment when his AC current helped light the Chicago World’s Fair – on Westinghouse’s dime, no less – confronts Edison. The chastened man admits he was wrong about the worthiness of his rival’s work. It’s Anne who tells us the apology never happened. Nor did Tesla’s off-key karaoke-bar rendition of Tears for Fears’ “Everybody Wants to Rule the World” with a refrain that explained his exasperation in a way the man himself never could. The method in Almereyda’s madness – that of putting Tesla into a tech universe he rarely got credit for helping to make – pays off in a film that roams as free as its subject’s imagination.