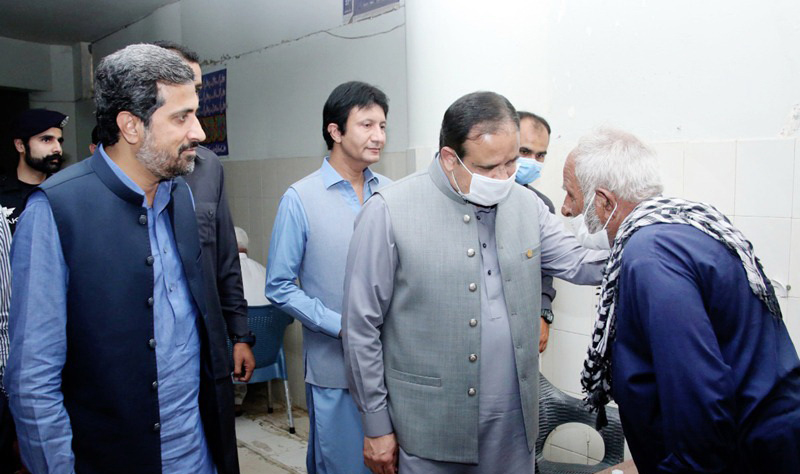 Punjab Chief Minister Sardar Usman Buzdar inspected the facilities provided to the inmates at Raja Bazaar shelter home in Rawalpindi. He was told that more than 64000 have benefitted from this facility while an average of 50 persons daily stay nowadays that are also provided breakfast and dinner. While directing to further improve the arrangements, the CM announced to establish another shelter home in Rawalpindi and issued directions to the administration to take further steps without delay.

An inmate appreciated that home-like environment is provided in this shelter home. Earlier, we have had to spend the night on the footpath in Rawalpindi but best facilities are provided here, another passenger told the CM. An elderly stayer from Peshawar told the CM that he is enjoying the hospitality and thanked him for the care. The CM also inquired about the quality of food and directed to take care of the health and convenience of the inmates. They should not face any difficulty as taking care of the abandoned persons is the responsibility of the government and it will not deviate from this responsibility, he said. I visit different shelter homes to personally monitor the arrangements, the CM added. Information Minister Fayyaz-ul-Hassan Chohan and parliamentarians were also present. The CM also met with tiger force officials and discussed different matters including the city situation. The tiger force officials are prime minister’s volunteers for public service and they are taking an active part in serving the masses, he added.

Meanwhile, On the direction of Chief Minister Punjab Sardar Usman Buzdar, the local government and community development department has launched baldiaonline mobile app which is available at Google play store. More than one lac people have downloaded this app. In this regard, the CM stated that citizens can online contact 445 local governments for using different services like a report about birth, death, marriage and divorce. Similarly, proposals and complaints can be lodged and more facilities will also be provided to bring ease in the lives of the citizens. The departments have been directed to fully use digital technology to provide maximum relief to the citizens, the CM added.

Chief Minister Punjab Sardar Usman Buzdar has expressed a deep sense of sorrow and grief over the death of senior journalist Azam Khalil. In a condolence message, the CM has extended sympathies to the bereaved family and prayed to Almighty Allah to rest the departed soul in eternal peace.

Chief Minister Punjab Sardar Usman Buzdar has said that no conspiracy theory hatched by the opponents will meet its success and regretfully remarked that the opponents want to halt the journey of progress by indulging into negative politics. He underscored that under the vibrant leadership of Prime Minister Imran Khan, we are setting right the shortcomings and follies committed by the previous governments. He stated that by the grace of Allah Almighty our inner self is transparent and clean. Usman Buzdar highlighted that no corruption scandal came to surface during the past two years tenure of PTI government which duly goes to its credit. Usman Buzdar emphasized that he neither committed any wrongdoing nor would allow anyone to do so. He pledged that PTI government would continue to tread on its journey to render public service without caring for any criticism.

CM illustrated that those elements indulging into negative politics by levelling baseless allegations will have to face failure and disappointment. CM stated that those elements raising hue and cry have no future and stressed that we would give a befitting reply to those doing organized propaganda against PTI government by virtue of displaying good performance.