Three music-industry trends from quarantine that are here to stay 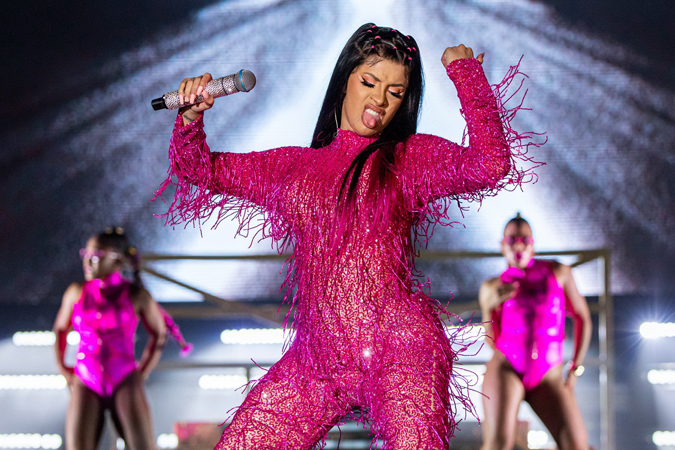 Music fans have faced a string of disappointments and oddities in recent months that the music industry will eventually be glad to turn its back on.

Yet when the pandemic finally fades to black, I hope that not every experiment tested out by artists, songwriters, record labels and others over lockdown gets banished – because there have been a handful of developments that the business would be foolish to discard.

Whether it’s the breakthrough of livestreaming as a viable format or artists fostering more meaningful relationships with fans, quarantine has forced the music industry to think in genuinely new ways, and make smart money from doing so.

Here are three of the best new ideas.

In April, Spotify made a long-awaited move by launching its “Artist Fundraising Pick” feature. Designed to help alleviate the lack of touring income coming the way of artists, it enabled fans to donate additional money to acts on Spotify, via PayPal.Me and Cash App. The response, it’s fair to say, was somewhat underwhelming, with an average of just 77 clicks per “Pick.”

Yet when the pandemic finally fades to black, I hope that not every experiment tested out by artists, songwriters, record labels and others over lockdown gets banished — because there have been a handful of developments that the business would be foolish to discard

Despite the failure of “tipping” to take off on Spotify, quarantine has definitely changed the game in terms of artists directly monetizing their fanbases. I wrote for Rolling Stone in January about Neil Young’s success with his Archive – a direct subscription service offering digitized content from the past, plus live streams and hi-res audio of his catalog. It’s estimated that Young is earning some $600,000 per year direct from his fanbase via the project. Young recently announced that he’s spent $20,000 to remove the ability for fans to log in to his Archives via Facebook and Google. He did so on anti-corporate political grounds, but his leap away from relying on social media giants – and toward a relationship with paying fans unencumbered by FAANG – is a trend to watch.

Cardi B seems to be thinking along similar lines: She announced last week on Instagram that she’d launched a $4.99-per-month subscription on OnlyFans – a platform best known for helping sex workers offer exclusive online content to paying members of the public. Clearing up any “WAP”-inspired confusion, Cardi is clear that she certainly “WONT BE SHOWING P**SY, T**TIES AND ASS” on her OnlyFans account. Instead, she’ll be offering a menu of behind-the-scenes footage from video shoots and other “straight up, real-life” content. OnlyFans’ own earnings calculator suggests that, if she’s successful at convincing even a small percentage of her 72-million-plus Instagram followers to pay the charge, Cardi will be pulling in millions more dollars each month.

Cardi B’s confidence in trying a direct-to-fan subscription model may have been influenced by a cultural shift caused by livestreaming over quarantine. Remember those early days of the pandemic, when artists were flinging scratchy livestream after scratchy livestream at us for free on Facebook Live, Instagram, etc? Since then, the likes of Laura Marling and Melissa Etheridge have forged meaningful business models out of playing into a camera’s lens. Etheridge is a particularly interesting case, having launched a pay-gated, video-based subscription service, Etheridge TV. She “broadcasts” to her superfans five days a week, and she’s been generating about $50,000 every month – via around 1,000 subscribers who each pay $50 per month for full access.

Etheridge started her livestreams in March on Facebook Live, but, like Neil Young, soon decided to move her IP away from large social media sites. Why didn’t she base her broadcasts on other established fan membership sites, like Amazon’s Twitch? Etheridge’s manager, Primary Wave’s Deborah Klein, told Forbes, “We wanted to find a solution where we were in the driver’s seat and there wasn’t a middleman between the customer and Melissa. We were hearing a lot about Twitch and Patreon, but I wasn’t really satisfied about the way the monetization looked. And not only was it the percentage they were taking, but you were stuck on what their platform was, we wanted to have our own, and customize it.”

Speaking of the rise of livestreaming, there’s been a wealth of startups exploding in the space over past few months, from Instagram phenom Verzuz, to Caffeine, which inked a multiyear deal with Drake in February to bring the Ultimate Rap League to its platform. There’s also been the entry of white-label platform Maestro into music, plus the launch of multiple money-making livestream platforms from the band Good Charlotte, Laura Marling’s management team and ex-CEO of Pandora Tim Westergren.

Question: What happens in any business when disruptors arrive to steal the lunch of industry-ruling incumbents? Yup – the incumbents fight back, and try to impress their scale on the situation. That’s exactly what we can expect to happen in the months ahead. Speaking on a Q2 earnings call on August 5, Live Nation President and CEO Michael Rapino revealed that his company’s experiments in livestreaming over lockdown had resulted in more than 67 million fans watching over 18,000 concerts/festivals in three months.

“Given the tremendous popularity of these shows, we are seeing the potential for livestreaming to become an additional long-term component of our concert business,” said Rapino. He added that Live Nation was “deep at work” on building livestreaming tech products to launch in the new year. Referencing Live Nation’s ownership of venues worldwide, its video-production expertise and its 900-plus existing sponsors, Rapino suggested that his company had a “natural advantage in the streaming business” versus smaller, emerging rivals.

Another firm which may believe it has a “natural advantage” in the market is Sony Music Group, the world’s second-biggest major music rightsholder, operating under the Tokyo-based parentage of Sony Corp. On Sony Corp’s calendar Q2 earnings call (August 4th), Sony Corp CFO and EVP Hiroki Totoki noted that his firm’s global music revenues were boosted by the launch of Stagecrowd in Japan, “a paid live video distribution service that serves as a one-stop shop for ticket sales, merchandise sales, and stage construction.” Don’t be surprised if we see Stagecrowd making its way West over the next six months, bringing the fight to the plethora of startups currently duking it out for livestream supremacy.

THE RISE OF THE INDIES — & THE REVIVAL OF D2C PHYSICAL SALES

There are two parallel narratives that continue to run in the modern record business: the globe-straddling, vastly lucrative power of the major labels, and the concurrent explosion of DIY/self-releasing artists doing things for themselves.

This dual story occasionally forgets a thriving community of companies operating in the middle of these two narratives: independent record labels, plus those indie “services” companies working with artists who own their own copyrights.

A release slowdown from major labels has likely been a contributory factor in a trend worth watching over in the UK: the market performance of debut albums released outside of Universal, Sony, and Warner’s walls. In the first six months of 2020, according to the UK’s Official Charts Company, the biggest debut album in the U.K. came from YouTube personality KSI, who released Dissimulation in May via Bertelsmann-owned BMG. The OCC confirms that Dissimulation was both the “most downloaded and streamed” debut in H1 2020.

The UK’s second biggest debut LP in the period also came from an independent source – Lauv’s How I’m Feeling, released via Kobalt’s AWAL in March. The good news for independents out of the UK doesn’t stop there, either: Indie label Perfect Havoc, which was only established five years ago, is currently spending its fourth week at the top of the Official UK Singles Chart via Joel Corry’s Head & Heart, which was dual released with Atlantic/Asylum Records. And Good Soldier, an indie label founded by former Warner UK head Christian Tattersfield, has this month claimed the Number One spot on the UK’s airplay chart via a cover of “Dancing in the Moonlight” by artist Jubel. Will the independents be able to keep this chart-topping performance up when the major-label machine roars back to full strength?

Talking of pandemic Number Ones, it’s also worth mentioning – as ever – Taylor Swift. Physical music sales in the United States fell to record lows in March and April, thanks to a combination of record stores being shuttered and the aforementioned deceleration in typical release frequencies. Yet with Folklore, Swift threw us a curveball: a direct-to-consumer campaign par excellence, in which no less than eight deluxe versions of her album were released on CD and vinyl, all exclusively available in Week One of release, via her own online store.

Scary data point: Physical music sales made up just six percent of Warner Music Group’s total global recorded music sales in calendar Q2. So it’s understandable why fears are still growing for the post-pandemic future of the CD. The success of Bandcamp Fridays – through which millions of dollars have been paid to artists via zero-commission mail-order CD, vinyl, and tape purchases – at least offers some hope for one future model whereby physical music can survive.

Swift offers another countervailing story to the doomsday forecasts. Thanks to her and her team’s innovative thinking, Folklore sold – as in, real sales, not streams – 627,000 units in the United States in Week One, according to Alpha Data, the company that powers the Rolling Stone charts. Her previous LP, Lover, released in 2019 via nationwide hoopla from Target and other blockbuster retailers, only sold a small amount more, at 715,000 copies.

One of these records, I humbly remind you, was released without any advance promotion during an unprecedented global health crisis that pretty much shut the world down. Expect music-industry imitations to swiftly/Swiftly follow suit.