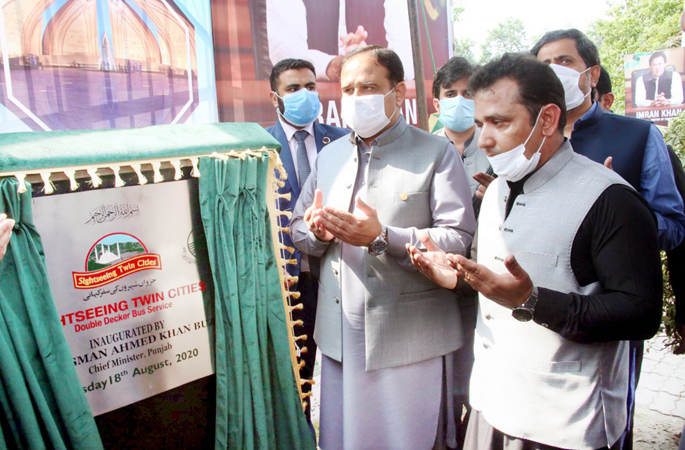 The ceremony was held at Allama Iqbal Park Rawalpindi. Chief Minister also inspected the bus where he was briefed about the route of the bus which will be from Allama Iqbal Park to Pakistan Monument. Buzdar also planted a sapling in the park on the occasion of National Day for Tree Plantation and prayed for the success of plantation campaign. Usman Buzdar while addressing the inaugural ceremony said that Prime Minister Imran Khan admires tourism greatly. He said that tourism related activities are being restored in the province which had been affected because of corona pandemic. He said that another promise made with people of Rawalpindi has been fulfilled by PTI government.

Usman Buzdar announced to extend the scope of Double Decker Bus Service to other cities as well for the promotion of tourism and said that every possible measure will be taken for uplifting and promoting tourism in every city of the province including Potohar region. He said that feasibility of Nullah Lai Project is about to be completed and PTI government will complete this project. Soon people will get good news regarding Rawalpindi Ring Road. He said that Rawalpindi Institute of Urology will be completed this year. An Institute is being set up in Rawalpindi with regard to tourism. He said that more buses will be provided for the promotion of tourism, if needed. There are plenty of beautiful places and lakes in Jhelum, Chakwal and Attock. These areas have great potential for tourism. He said that some time back he visited Murree and directed to solve its problems. He said that funds will be provided on priority basis for solving the problems of water in Murree. Kohsar University has been approved. Tourist spots including Murree will be further beautified by improving the facilities. Government rest houses have been open for people for the promotion of tourism. Murree hospital is being upgraded.

He said that a new police station would be constructed and sub-division of Murree will be upgraded. Government is giving special attention on the development of backward areas. 33 per cent budget allocated for the development and progress of Southern Punjab cannot be used for any other purpose. Secretaries will be appointed in Southern Punjab Secretariat and they will be empowered. Punjab cabinet has made necessary amendments in Rules of Business for this purpose. “The journey of development will remain continue under the leadership of Prime Minister Imran Khan and nation will soon reach its destination/goal.”

Usman Buzdar while talking with media informally, said that those who were hatching conspiracies do not want Punjab to develop and progress as these elements are against the progress of the country. After every four months, they fabricated stories of my quitting from the office. In response to a question about the issuance of license, the Chief Minister said that his case is in the court so he will not comment on it. Answers of the questions asked by NAB are on television now. He respects every institution including the judiciary. Usman Buzdar said that he will continue discharging his duties according to law. He said that state-of-the-art Safe City Project will be started in Rawalpindi.