W. African bloc, France warn of ‘mutiny’ in Mali after troops seize base 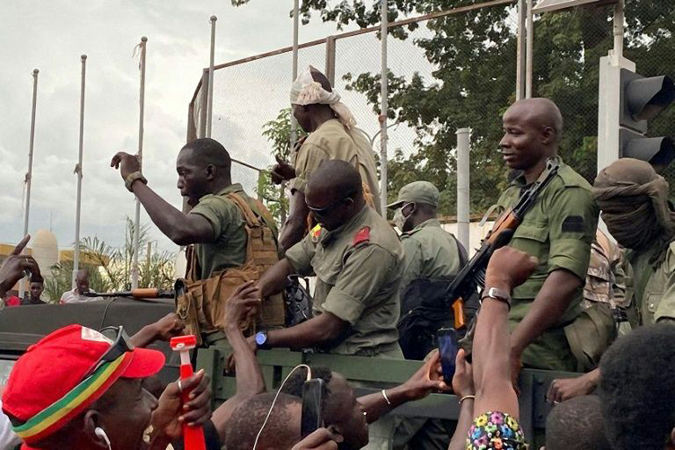 West African nations joined by France said Tuesday that soldiers in crisis-torn Mali had rebelled and urged them to return to their barracks, after unrest erupted at a key base near the capital.

In separate statements, the 15-nation regional bloc ECOWAS and France accused troops of “mutiny” at a time of wrenching problems in their country, and warned against any undemocratic change of power.

The Malian government said the soldiers may have “legitimate frustrations” and urged “fraternal dialogue in order to remove all misunderstandings.”

The statements gave no details, but witnesses earlier reported gunfire at an army base in the town of Kati, some 15 kilometres (nine miles) from Bamako, which was then sealed off by troops, an AFP reporter saw. A soldier told AFP that disgruntled troops had taken over the camp and were holding “several senior army officers.” An officer at the camp said many soldiers were unhappy with Mali’s political situation, adding “We want change.”

Reports circulated in Bamako that ministers had also been arrested, but these could not be confirmed.

Convoys of armed men travelling in pick-up trucks — some dressed in military fatigues — also arrived in Bamako on Tuesday and were cheered on by jubilant crowds, an AFP journalist saw.

A 2012 putsch that opened the way to Keita’s presidency began in the Kati base, and fears quickly grew of another coup attempt in the fragile country.

Protesters also gathered on Bamako’s Independence Square on Tuesday, AFP journalists saw. Some later looted an office of the justice minister, which lies just off the square.

The embassy of France, the former colonial power, recommended on social media on Tuesday that everyone remain at home.

Mali has been in the grip of a deep political impasse since June, with the 75-year-old president facing increasingly strident demands for his resignation.

So called after the date of its first protest, the June 5 Movement has been channeling deep anger over a dire economy, perceived government corruption and a brutal jihadist conflict.

Its anti-Keita campaign veered into crisis last month when at least 11 people were killed during clashes with security forces, over three days of unrest following a protest.

“ECOWAS… calls on the soldiers to return to their barracks without delay, and requests all Malian stakeholders favour dialogue to resolve the crisis gripping the country,” its statement said in French. “ECOWAS reiterates its firm opposition to any anticonstitutional change,” it said.

Virtually identical language was used in a statement issued by the French foreign ministry, which also said France “condemns this grave event with the utmost firmness”.

The United States’ envoy to the region, J. Peter Pham, joined the calls for restraint and echoed its opposition to any “extraconstitutional” change.

Mali’s allies and neighbours are anxious to avoid the country sliding into chaos.

Swathes of its territory are already outside of the control of the government, which is struggling to contain a jihadist insurgency which first emerged in 2012 and has claimed thousands of lives.

The failure to end that conflict contributed to frustrations with Keita’s rule in Mali.

Tensions were also revived in April, when the government held a long-delayed parliamentary election whose results are still disputed.

ECOWAS on July 27 suggested the formation of a unity government while sticking by Keita, but the compromise was bluntly rejected by the June 5 Movement.

The coalition on Monday vowed to press ahead with its campaign to force Keita to step down.

It declared it would stage daily protests that would culminate in a mass rally in Bamako on Friday.