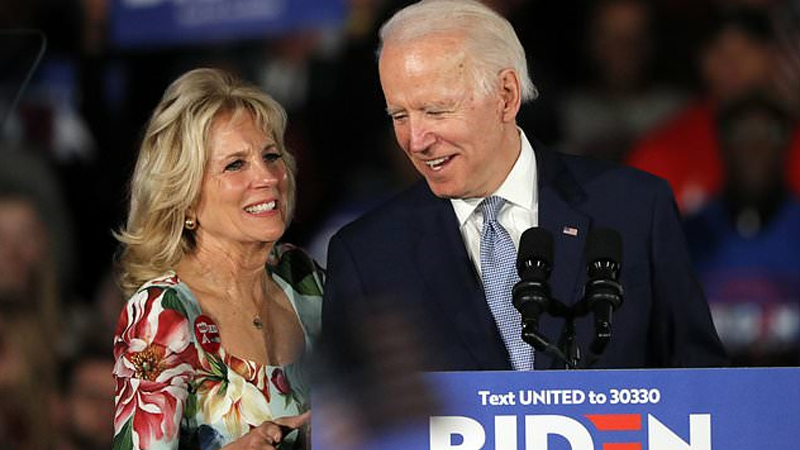 Jill Biden is a prankster. It´s the first thing most of her friends and former aides say when asked about her character. She once sneaked into a close aide´s birthday party dressed as catering staff and surprised him with a drink. She has dressed up as the Grinch to toy with colleagues during Christmas. And she likes to put on a red wig with a bob to pop up unnoticed at events or make her husband, Joe Biden, laugh.

That sense of humor has helped Joe Biden navigate decades in public life that have been marked by achievements, defeats and considerable personal loss. As she prepares to speak Tuesday at the Democratic National Convention, those who have worked closely with Jill Biden say her warmth will appeal to Americans confronting tough times of their own.

“She has a very good sense of, especially in these times, that bringing a little smile, some joy, some levity into moments is important,” said Courtney O´Donnell, who served as Jill Biden´s communications director during her husband’s first term as vice president, said it´s been key to her appeal.

Jill Biden married the presumptive Democratic presidential nominee in 1977, more than four years after his first wife and young daughter were killed in a car accident. She helped raise his surviving sons, Beau and Hunter, before giving birth to daughter Ashley in 1981.

As Joe Biden commuted from Delaware to Washington while serving as a senator, Jill Biden built a career as a teacher, ultimately earning two master’s degrees and then a doctorate in education from the University of Delaware in 2007.

Along the way, former coworkers say, Jill Biden, 69, became one of her husband’s most valuable political advisers, someone whose opinion was paramount in most of his biggest decisions, both political and personal. She was skeptical of his 1988 presidential campaign, but pushed him to run again in 2008, according to her memoir. After Joe Biden became the presumptive nominee this year, she played a prominent role in auditioning many of the vice presidential candidates, appearing with them at various events. During a recent interview on CBS, Jill Biden acknowledged that she and her husband “talked about the different woman candidates”

“But it´s gotta be Joe´s decision,” she added. But those who know Jill Biden best say she´s slightly perplexed at being called one of her husband´s most significant “advisers,” insisting that her relationship with her husband is far deeper and more nuanced than such a label would suggest.

“He´s got plenty of political advisers. That´s not what she is,” said Cathy Russell, who was Jill Biden´s chief of staff during the Obama administration and is now a vice chair on the campaign. “She is his spouse, and she loves him and she talks to him about all sorts of things, but she has a unique role, and it´s not being a political adviser. That´s not her thing.”

Jill Biden does remain one of her husband´s closest confidantes – particularly now, at a time when both Bidens are largely confined to their Wilmington home due to the coronavirus pandemic. Aides say the Bidens often pass each other in the halls during the day as they head from a briefing to a virtual event to a fundraiser.

“They see each other a lot, but there´s a lot of passing and crossing each other. In the evening they try to sit together and just kind of regroup and chat about things,” Russell said. “They´ve got grandkids and kids and two dogs. They´ve got family and lives that are sort of spinning around them, and I think they just try to always find time for each other.”

A self-described introvert, Biden was initially a reluctant political wife. In her memoir, she writes of giving her first political speech and having no desire to “give any speeches, anytime, anywhere – just the thought of doing so made me so nervous I felt sick.”

But after eight years as the vice president’s wife and then giving speeches and appearing at events after her husband left office, Jill Biden has become one of her husband’s most prominent surrogates. She has appeared in virtual events in more than 17 cities since May, and is one one of the campaign´s primary surrogates to Latino voters, headlining town halls and holding frequent calls with members of the Congressional Hispanic Caucus.

In one week this month, Jill Biden appeared at everything from a science-focused fundraiser to an event with Joe Biden´s faith coalition to one focused on LGBTQ youth, speaking with emotion and fluency about her husband´s plans for each constituency.

She’s also one of his most protective surrogates, a quality she writes about in her memoir – and one that was on full display during a Super Tuesday speech Joe Biden gave in March when a handful of protesters rushed the stage. Jill moved between the protesters and her husband, at one point pushing a protester away.

But the resistance to being called an “adviser” on Biden´s team reflects Jill Biden´s persistent and successful efforts to carve out her own career and identity independent of her husband´s political ambitions, something she prioritized even during his time in the Senate.

“They lived in Delaware always, through all those Senate campaigns, and she had her own life. She was raising her children, she was teaching, she was going to school at night at different times,” said Russell. “She was never a part of the Washington scene. That political life just wasn´t her life.”

Jill Biden continued to teach at a community college while her husband was vice president, against the advice of multiple aides at the time.

“Being a teacher is not what I do but who I am,” she wrote in her memoir, and described “scrambling into a cocktail dress and heels” in the bathroom at her school to make it to a White House reception, or grading papers on Air Force Two, with relish.