As Iraq PM heads to US, pro-Iran groups step up attacks 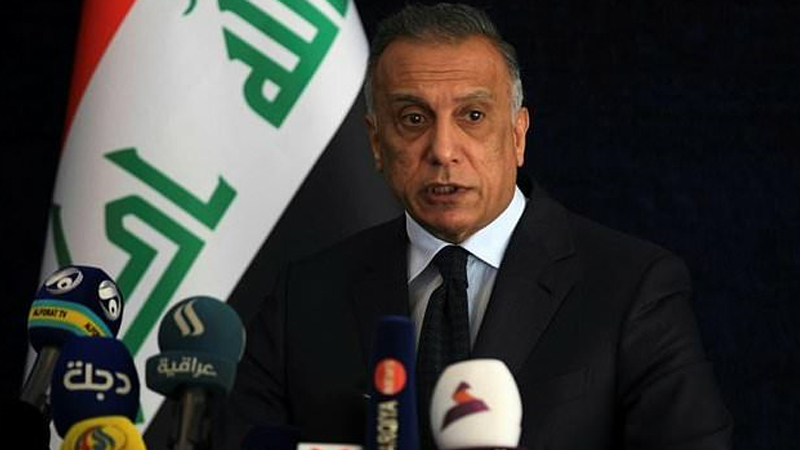 As Iraqi Prime Minister Mustafa al-Kadhemi prepares for his first meeting with US President Donald Trump this week, attacks on American targets by pro-Iranian fighters have been on the rise.

With Tehran and Washington competing for influence in Iraq, the gulf between pro-Iranian factions and Baghdad’s US-friendly premier is growing. When Kadhemi meets Trump on Thursday for the first time, the top agenda for the Iraqi leader is the presence of 5,000 US troops deployed in his country.

Kadhemi, who took office in May, faces challenges from factions of the Hashed al-Shaabi, a coalition of Iraqi Shiite paramilitary groups with close ties to Iran.

The Hashed al-Shaabi is integrated into the Iraqi state, and its political representatives have called for the expulsion of US troops.

Pro-Iranian factions were hit hard by Washington’s assassination in January of one of their top chiefs, Abu Mahdi al-Muhandis, in a strike that also killed top Iranian commander General Qasem Soleimani.

The Hashed denies any connection to a recent spate of anti-US attacks, but videos and claims on social media hint at its involvement, through groups operating under other names.

“The personnel that make up the new militias are most likely pulled from the membership of pre-existing armed groups that make up the Hashed al-Shaabi,” said Ramzy Mardini, from The Pearson Institute at the University of Chicago.

Kadhemi — far closer to Washington than his predecessor Nuri al-Maliki — has angered armed groups by seizing border posts where they ran lucrative smuggling networks and imposed taxes on traders.

Attacks have risen in recent weeks.

From October to the end of July, Iraqi armed factions carried out 39 rocket attacks against American interests in the country.

But after the White House earlier this month confirmed that Trump would meet Kadhemi on Thursday, the pace intensified.

Between August 4 and August 16, 13 bomb and rocket attacks targeted Iraqi logistics convoys for the US military, bases housing US soldiers and the US embassy.

While the impact has been limited, the attacks have served as a show of strength.

After an attack on a convoy in Iraq’s south, a man was arrested in possession of bombs and a Hashed military ID card that allowed him to cross checkpoints without a search, an intelligence source told AFP.

Some attacks have been carried out by groups with other names including the “League of Revolutionaries”.

“They operate under new banners to mask and protect the established militia leadership from facing possible retaliation,” Mardini said.

“If these groups are operating outside the government, Baghdad is less likely to be held responsible and punished by Washington,” he added.

But by increasing the number of attacks, it also sends a signal to Kadhemi that he cannot prevent attacks simply by raids and arrests against the militias.

At the end of June, 14 fighters from the Hezbollah Brigades, a Hashed faction, were arrested for attacks on Americans.

Three days later, 13 were released on the decision of a Hashed military judge.

For many Iraqis, the spate of violence increasingly reminds them of the jihadist attacks against US forces following the 2003 invasion.

Their videos appear to echo the propaganda produced by Al-Qaeda and the Islamic State group, with slick special effects and religious songs.

In Iraq’s largely Shiite Muslim south, where the recent attacks were concentrated, many fear the same fate as that of Iraq’s Sunni regions, which was left in ruins by the war against the jihadists. In a country that emerged 10 years ago from a bloody sectarian war between Sunnis and Shiites, the government fears a new conflict. The strategy, several government officials say, is therefore to act — but without naming groups responsible. When a German hostage was freed in July, Baghdad did not blame anyone, even though officials said “factions claiming to be Hashed” were involved.

The assassination in July of researcher Hisham al-Hashimi, a close friend of Kadhemi who had studied the Hashed, had already been seen as a message to the prime minister. But investigations into Hashimi’s death have still not revealed anything — one sign the government cannot be as tough as it may like.