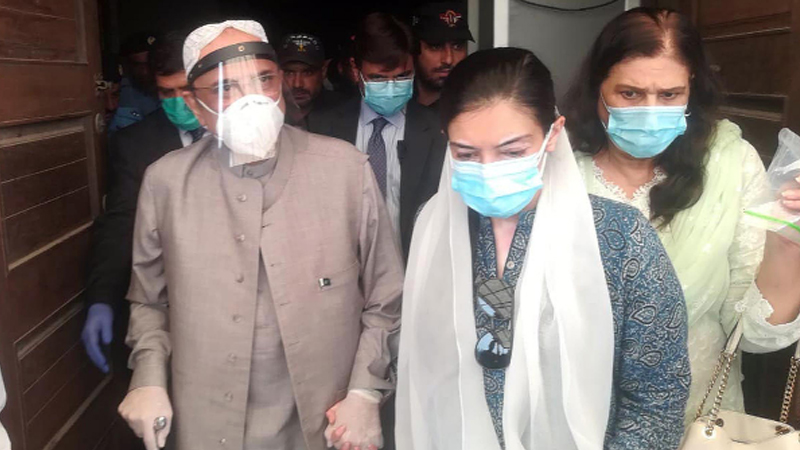 Pakistan People’s Party (PPP) Chairman Bilawal Bhutto Zardari on Monday said the party was being pressurised over the 18th Amendment and the National Finance Commission (NFC), but vowed it would not change its stance on these vital issues.

Talking to media after former president Asif Ali Zardari’s appearance before an accountability court, Bilawal stressed that the PPP would not compromise on the economic rights of the people and the constitution of Pakistan.

“The PPP is being pressurised for 18th Amendment and the NFC but the PPP will not change its stance on such vital issues,” he told reporters. “If you want to arrest my entire family then do it but we will not compromise on the economic rights of the people and the constitution of Pakistan.”

Bilawal criticised the strict security arrangements at the court, where the former president was presented for the Toshakhana reference by the National Accountability Bureau (NAB).

“Today all roads to the NAB court were blocked to stop people from witnessing the injustices meted out to PPP leadership,” Bilawal said. “Even president Zardari’s counsels, Advocate Farooq Naik and Sardar Abdul Latif Khosa, were stopped by the police,” he added.

“The entire Islamabad police are deputed for one court appearance,” he said, adding that several senior Supreme Court lawyers were also stopped. He asked whether it was a tactic to pressurise judges or the PPP. “Is it an independent state? What did they want to hide from the judges of the Supreme Court and the people of Pakistan,” he asked.

“Today is 17th August and every jiyala remembers this day because this [day in 1988] was the last day of dictator Ziaul Haq. This should also be the end of this hybrid regime, which is running through NAB. The PPP fought against dictators Ayub Khan, Yahya Khan, Ziaul Haq and Musharraf and it is still fighting against this puppet regime,” he said.

Bilawal Bhutto Zardari said that it was ironic that one judge of the NAB allowed Zardari to appear via a video link but the other NAB court judge ordered him to appear in person despite the COVID-19 pandemic. However, he added the PPP has always respected courts. He said the PPP was still expecting justice from the courts in Shaheed Zulfikar Ali Bhutto’s case.

The PPP chairman said that a notorious terrorist Ehsanullah Ehsan escaped from custody. “He is the same person who boasted about martyring children of the Army Public School (APS) but no court in the country took suo motu notice. If they cannot give justice to the children of the APS, who they will give justice to,” he concluded.

Meanwhile, hearing the Toshakhana reference against Zardari and former prime minister Syed Yousaf Raza Gilani, the accountability court decided to frame charges against them on September 9.

Zardari along with the PPP Chairman Bilawal Bhutto Zardari who reached Islamabad from Karachi on Sunday evening, appeared in the court. Zardari was accompanied by his sister Faryal Talpur, Bilawal and other top leadership of the PPP.

When Zardari arrived in the court amid COVID-19, Bilawal requested all PPP leadership and workers to leave the court premises and asked them to avoid gathering on the occasion.

Bilawal even urged the attorneys’ assistants to leave the courtroom due to the prevalent COVID-19 situation.

During the court of hearing, not only accused leaders’ lawyers but a judge in the bench also complained about the security measures in placed by the government.

The court issued warrants for Zardari in the reference and asked him to appear before the Accountability Court on August 17, while Gilani has been granted exemption from appearance. Nawaz Sharif had challenged his non-bailable arrest warrants issued by the accountability court in in Islamabad High Court and requested to allow him to join the Toshakhana reference proceedings through his pleader.