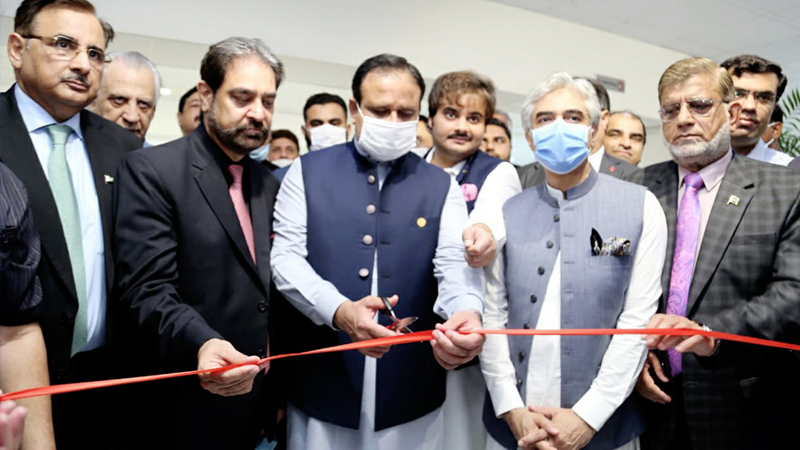 Later, Usman Buzdar while addressing to business community in LCCI, said that best facilities have been provided in the state-of-the-art One-Window Smart Service Centre. LCCI is the first chamber which has taken lead in setting up of smart service centre and other Chambers of Commerce & Industry should also establish smart centres. He said that LCCI has also come forward in the beginning of Covid-19 pandemic for helping the corona affectees and donated in Chief Minister Relief Fund. He said that by the grace of Allah Almighty we have reached on pre-corona situation and timely decisions impeded the spread of Covid-19 Pandemic under the dynamic leadership of Prime Minister Imran Khan. Situation of corona in Pakistan is far better as compare to other countries.

Usman Buzdar said that government is determined to create ease for the industrialists and traders. The role of inspectors for undertaking inspection in the industries is under process to the done away with. He further maintained that focal person would be deputed in the concerned departments for facilitating industrialists and traders. He said that only three Special Economic Zones (SEZs) were established during the last 70 years whereas 13 Special Economic Zones have started functional in two years tenure of PTI government. 7 SEZs have been notified, he added.

Usman Buzdar said that approval for necessary amendments in the Rules of Business has been given for empowering Southern Punjab Secretariat. All secretaries will be appointed in Southern Punjab Secretariat and will be empowered. He further stated that law and order situation of Punjab is far better than other provinces. Scope of Model Policing will be extended to other cities as well. He said that police was used for victimizing the political opponents in the past but we have empowered the police. 10,000 recruitments are being made in the Police Department on merit. Government is giving 575 new vehicles to the police, 45 new police stations are being constructed and land is being provided for 101 police stations. Approval for granting Executive Allowance to the Police Department has been given. Setting up of Model Police Stations will bring significant change, he added. Working environment in Police Department is being improved. He further disclosed that work will soon be initiated on the construction of new parking plaza in Lahore. Usman Buzdar said that treatment plants are utmost necessary for protecting the city from the pollution. He said that PTI government has laid a foundation of River Ravi Urban Development Project. With the inhabitation of new city near Lahore will greatly help to reduce the pollution. This city will starch to 46 km long and can store 5.75 lakh cusec water. He said that level of underground water in Lahore has substantially lowered down besides increasing environmental pollution. Setting up of new city will help to increase the underground water level as well as cope up the challenges of pollution. More than 90 percent local material will be utilized in this project which will not only promote and benefit local industries including cement and 40 others industries but also accelerate the wheel of economic activities. He said that no attention was paid on the agri research in the previous regime and no fund had been allocated for the agri research wing.

Meanwhile, Usman Buzdar expressed deep sense of sorrow and grief over the loss of precious human lives due to overturning of boat in Keenjhar Lake. CM extended heartfelt sympathies to the bereaved family members and said that we equally share all our sympathies with the heirs of the deceased persons.