Caribbean Premier League 2020: No crowd, no Gayle, a quiet party 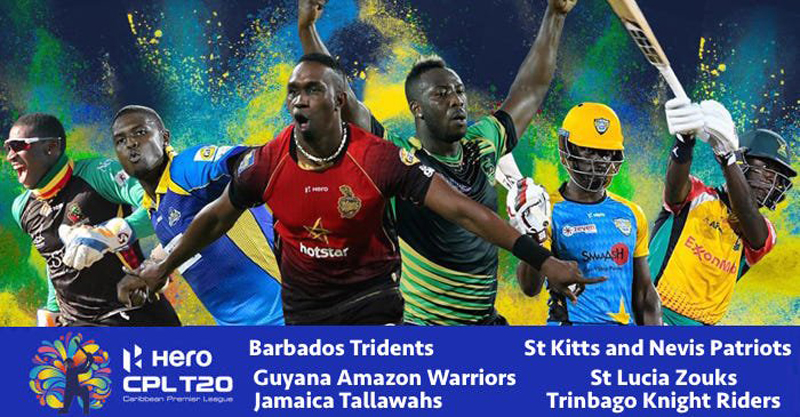 BARBADOS: Caribbean Premier League 2020, the biggest party in town, begins on August 18 (Tuesday) in Trinidad & Tobago. However, it will be a quiet affair due to the Covid-19 pandemic. This will be the first T20 league during the pandemic, which will be played in a single country at just two grounds. Due to the global travel restrictions, many franchises have also been severely affected by the absence of key overseas players. A look at some of the key talking points that would come into play during the 23-day tournament, which will also act as training ground for some players and coaches ahead of the IPL, which begins on September 19, nine days after the CPL final on September 10.

Lopsided Scheduling: The fact that Trinbago Knight Riders and St Lucia Zouks have Indian ownership has forced not just the CPL to conduct matches to suit the Indian viewership, but the schedule also favours those two franchises. The Knight Riders and Zouks play eight and seven day matches, respectively. The lopsided nature of the schedule is evident when you compare that with Guyana Amazon Warriors and Jamaica Tallawahs, who play just one and three day matches, respectively. This could affect teams in multiple ways especially with rain likely to have an impact on the tournament. For teams like Amazon Warriors, who play nine matches under lights, dew is likely to play a major factor. If it remains dry during day matches, then Knight Riders and Zouks can dominate with their spin-laden bowling attacks.

Playoffs format tweaked again: The playoffs format this year will comprise just the two semi-finals and the final without any advantage for the team winning the league stage. There will be one less match compared the four games during the play-offs last year.

Spin to win: Queens Park Oval in Port-of-Spain will host ten matches while the Brian Lara Stadium in Tarouba will stage 23 games. With pitches set to deteriorate rapidly, there is a good chance that spin could play a dominant role. Also, spin has worked well at both the venues: slower bowlers have conceded 6.90 runs per over compared to 8.38 by pace bowlers. Hence there is a good chance that teams such as Barbados Tridents and Knight Riders could field even four spinners in the XI. Get ready to watch some masterclasses by legspinners like Rashid Khan (Tridents), Imran Tahir (Amazon Warriors), Sandeep Lamichhane (Tallawahs) and Zahir Khan (Zouks).

No Gayle in CPL 2020: T20’ s leading run-getter and six-hitter will not be part of 2020 season. Having decided to move to the Zouks after a bitter fallout with Tallwahs, Chris Gayle pulled out of the tournament recently, citing family reasons, taking everyone by surprise. As it happens, Gayle is the top scorer in CPL as well, with 2354 runs at an average of 39.23 and a strike rate of 133.44, including four centuries. Needless to say, in a tournament already affected by the pandemic and no crowds expected at least during the league phase, Gayle’s propensity to do the unthinkable could have provided the necessary balm.

Who are the emerging players to watch out for? The CPL has made it mandatory for each team to give an emerging player a minimum of five games during this season. The rule states that at least one emerging player should make five appearances or multiple players should make five combined appearances. The rule is designed to provide exposure to young, uncapped talent. So, watch out for Jayden Seales (Knight Riders) and Nayeem Young (Tridents) who shot to fame in the Under 19 World Cup earlier this year. Joshua Da Silva from St Kitts & Nevis Patriots, who recently kept wickets as a substitute during the final Test of the England series, is another young player who might have a breakthrough season along with speedster Keon Harding (Tridents).

The favourites: With 2410 T20 caps between them, one can’t really look past Knight Riders, who have won the CPL thrice and this time will be playing the entire league at home. In terms of experience, if you put together the entire squad of Tridents and Amazon Warriors even then they have fewer matches than Knight Riders whose line-up includes greats like captain Kieron Pollard, Sunil Narine and Dwayne Bravo. They will be coached by Brendon McCullum, who is the third-highest scorer in T20 cricket. This will be McCullum’s second stint as Knight Riders’ coach in the CPL and he will want to make use of this experience before he heads to the UAE to take charge of the other Knight Riders franchise (KKR) in the IPL. Five-time finalists Warriors will miss their regular captain Shoaib Malik, but they remain firm favourites as well. Chris Green has taken over as captain and will have a point to prove after he had been pulled up for suspect action. He has got his action cleared since, but is yet to test it out in top-flight cricket. Green, who plays for Sydney Thunder in the BBL,was the most economical T20 bowler in 2019 and was even picked by Kolkata Knight Riders in the most recent IPL action. As for Tallawahs, they have a power-packed middle order that could spring a surprise. Their gun allrounder Andre Russell will also have a point to prove after having said recently that this could be his last season with the team.