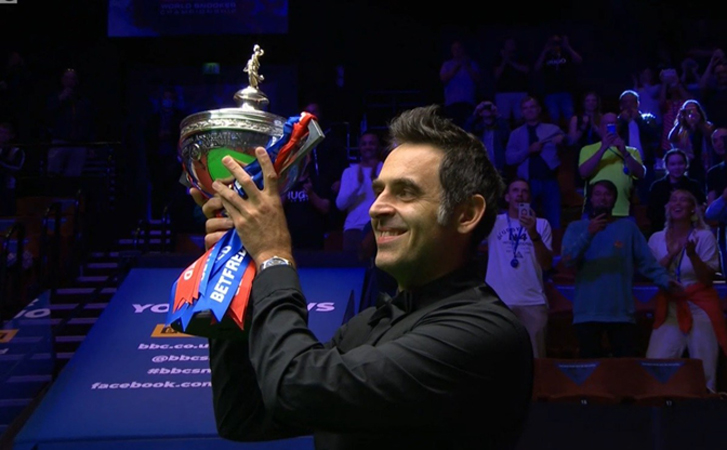 LONDON: Ronnie O’Sullivan produced a devastating burst to crush Kyren Wilson 18-8 and claim a sixth world snooker title on Sunday. Sheffield’s Crucible Theatre looked set for another slice of drama when Wilson recovered from 8-2 on Saturday to trail 10-7 overnight and then won Sunday’s opener to close the gap to two frames. But O’Sullivan, jaded and out of touch on Saturday, fluked a red early in the second frame of the day and proceeded to switch on the kind of effortless break-building that is his trademark, then reeling off a victorious streak of eight straight frames. The 44-year-old entered the evening session 17-8 ahead, needing just one more frame to get his hands back on the trophy he first claimed in 2001 as well as in 2004, 2008, 2012 and 2013.

There was to be no miracle comeback for Wilson as O’Sullivan, long admired as the game’s most dazzling talent, wrapped up the title with a majestic break of 96. “I never really think about titles,” O’Sullivan said in the arena afterwards. “When I was a kid I never really dreamed I would be here. To be here and have had all those victories is a dream that has become a reality. “I am not really an endurance-type player because I don’t compete enough. I had half a chance but didn’t expect to win it.” The victory was the biggest winning margin in a final in 12 years when O’Sullivan himself beat compatriot Ali Carter with an identical scoreline.

O’Sullivan is the oldest winner since Ray Reardon, who was 45 when he prevailed in 1978, and moves alongside the Welshman and England’s Steve Davis on the list of multiple world title winners, one behind the modern-day record holder Stephen Hendry. After the nailbiting semi-finals in which O’Sullivan and Wilson both won final-frame thrillers it was something of an anti-climax for the limited crowd that were allowed in after a relaxation of the government’s COVID-19 restrictions. The tournament was initially selected as a part of the government’s pilot programme to return fans to sports venues but a rise in infections forced a U-turn at the start of the event.