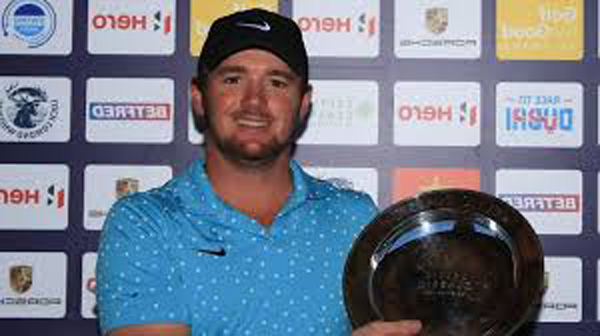 LONDON: England’s Sam Horsfield kept his nerve to clinch his second European Tour title just 14 days after his maiden win, with a final round 67 enabling him to clinch the Celtic Classic by two shots on Sunday. Horsfield, who finished 18-under-par for the tournament, again got the better of Thomas Detry at The Celtic Manor Resort in Wales, having also beaten the Belgian to win the English Open in Birmingham earlier this month. Horsfield was a shot behind 54-hole leader Connor Syme, of Scotland, at the start of the final round but stormed into the lead before the heavens opened and lightning suspended play for two hours with the 23-year-old leading by three shots. A birdie at the 14th, where the ball paused on the edge of the cup before gravity took over, and a crucial par save at the 17th took the pressure off Horsfield when he headed to the final hole after Detry had already completed his round. Having missed the cut at the English Championship last week, Horsfield made no mistake in becoming the first player on the European Tour ever to win an event, miss the cut in the next and then win the third in consecutive weeks. Syme eventually finished third, tying with England’s Andrew Johnston and Belgian Thomas Pieters three shots behind the winner.