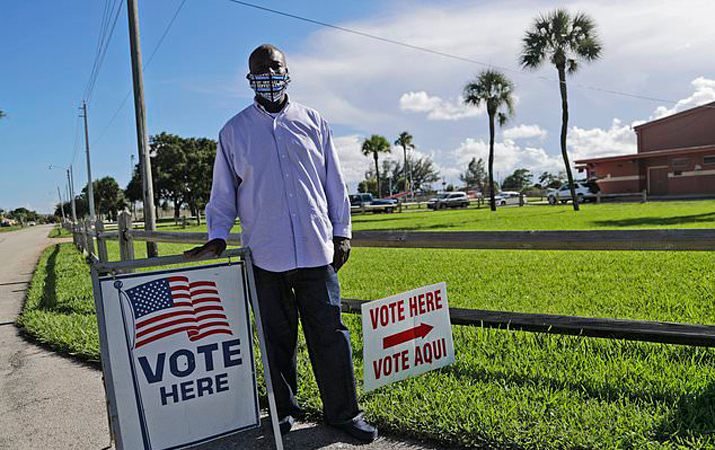 When Floridians overwhelmingly approved a measure allowing most felons to vote after completing their sentences, many expected Democrats to benefit most from the participation of up to 1.4 million newly eligible voters in this year´s election.

But the coronavirus pandemic, which has hampered registration drives, and a disputed requirement that felons pay a series of costs before their rights are restored have turned the anticipated geyser of new voters in the largest swing state into a trickle.

The state does not track how many felons – or “returning citizens” as many activists call them – have been registered since Amendment 4 passed in 2018, lifting a ban enacted following the Civil War. But Desmond Meade, president of the Florida Rights Restoration Coalition, the amendment’s main backer, puts the number at 100,000.

He hopes to add 40,000 more by the state’s Oct. 5 general election registration deadline.

Although the tally is far from the originally anticipated surge of new voters, Meade points out that 140,000 would still be more than the 110,000 votes by which President Donald Trump carried Florida in 2016 and, famously, the 537 votes that separated Republican George W. Bush from Democrat Al Gore in 2000.

But, he added, there’s also a principle, not just an election, at stake.

“This is about American citizens having their voices heard,” said Meade, who registered last year after a drug conviction two decades ago.

Most Floridians apparently agreed: The measure garnered support from liberal and conservative groups and passed with 64% of the vote.

Not all felons vote Democratic, of course, but some observers argued that the party would be the big winner since African Americans are disproportionately represented in Florida´s felon population and they favor the party by wide margins.

But a dispute over the amendment’s wording means it has fallen short of its promise. Amendment 4 allows people convicted of felonies – with the exception of murders and sex offenses – to register once they finish their sentences.

Its backers say that means once the prison term and probation are complete. But Republican Gov. Ron DeSantis and the Republican-dominated state Legislature said the amendment also required felons to fully pay any fines, fees and restitution owed – and enacted a law spelling that out last year. The amendment’s backers have challenged that in court.

A study by University of Florida political science professor Dan Smith estimates that 77% of eligible felons owe some money, with 60% owing at least $1,000 and 19% at least $10,000.

“The state of Florida´s strategy is to make it exceedingly difficult, if not impossible, for these individuals who have done their time and want to get their lives back in order,” Smith said.

But Republican state Sen. Jeff Brandes, who sponsored the bill, noted that when the amendment was proposed, its backers told the state Supreme Court that a completed sentence included paying all monetary obligations.

“There is some concern that there is a bait and switch going on here,” Brandes said, adding that he supports restoring the right, and his legislation makes it easier for felons to get costs waived by a judge.

The Florida Rights Restoration Coalition has raised more than $4 million to help pay court costs. Donations have come from retired basketball star Michael Jordan as well as More Than a Vote, an organization dedicated to maximizing Black turnout that counts basketball star LeBron James and comedian Kevin Hart among its backers.

Still, the total owed could be as high as $3 billion.

He did community service to pay most of his costs, but records show he still owes $780 – a fact that surprised him because he thought that sum had been paid by the rights restoration coalition.

The group says the payment will clear soon. There is no way for officials to immediately check if felons owe money when they register, but they could face prosecution if they lie. Many prosecutors, however, have said they will not bring charges against those who register believing they owe nothing.

Alluding to his surname, Freeman said it wasn´t until he was allowed to register that he felt like a “real free man.”

“When we have served our time, we have paid our obligation to society,” he said.

But it is not just money hampering the registration drive. The pandemic shut down festivals, concerts and other large gatherings that are prime spots for signing up voters. Restrictions to control the virus also mean canvassing is now done almost exclusively by phone, instead of by knocking on doors. That means volunteers can´t help the person fill out the form and collect it. Instead, they must trust the person will register online. “I was having a lot of success with returning citizens when I was canvassing, but with the telephone, you can hide behind it and say no and hang up,” said Ronald King, who registers voters in Jacksonville for New Florida Majority, which focuses on marginalized populations.

Even if the payment requirement were lifted, Smith, the University of Florida professor, and Florida Atlantic University political science professor Kevin Wagner both said there are too many unknowns to say with certainty that Amendment 4 would benefit Democrats, including how many of the newly registered will turn out.

Wagner compared it to the 1993 federal Motor Voter Act, which required states to offer registration to anyone getting or renewing a driver’s license. That law, too, was seen as a potential boon for Democrats. “There was really no net benefit for either party,” Wagner said.