Can US retail sector’s ‘V-shaped’ rebound jump the fiscal cliff? 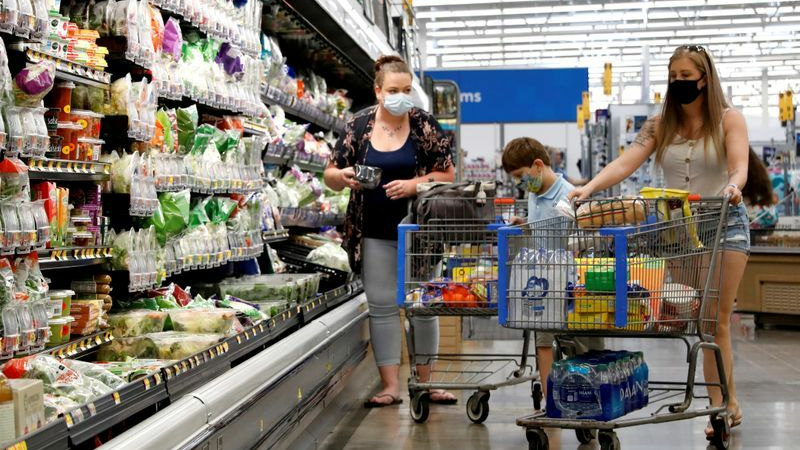 Even with nearly a fifth of the labor force collecting unemployment benefits in July, Americans continued spending with relative gusto, driving retail sales back to pre-coronavirus levels as they shifted shopping online, brought their food home, and stocked up on new appliances.

The downside: It was government money they spent, and that is now drying up even as a recent spate of unexpectedly upbeat economic data – including a larger-than-expected rise in payrolls last month and the first drop below 1 million in weekly new jobless claims since March – takes the pressure off Congress to renew the unemployment benefit supplement and business loan programs that ended last month.

The dilemma is a stark one as the United States ends its first half-year of pandemic confusion. Is the economy on its way back as consumers and businesses learn to live with new health risks, or nearing a more serious nosedive?

Consumer spending drives about two-thirds of the US economy, and the July numbers “are encouraging because they suggest the recovery has continued to grind on even in the fact of the resurgence in virus cases,” wrote Michael Pearce, senior US economist for Capital Economics. Though the loss of unemployment income, if it persists, “poses a downside risk to spending in the near term … consumption growth will recover gradually from here.”

Oxford Economics senior US economist Lydia Boussour, by contrast, called the July number “sobering” because it was below expectations, and signaled consumers were already growing cautious through July as the growth in coronavirus cases rebounded and some states imposed new restrictions, unemployment remained high, and the expiration of government benefits approached.

The 1.2% jump in retail sales was “only half the expected gain,” she wrote, and “underscores that wary consumers have turned more cautious … The recovery in consumption … will be restrained by income cliffs and renewed virus fear.” Those two views – of a recovery grinding ahead as people adapt and health risks are gradually controlled, or of massive family and business failures in the near future – are at the root of a stalemate in the US Congress that saw lawmakers head home until September with no sign of progress on a new stimulus package.

That makes August a test of whether daily growth in coronavirus cases will continue a recent decline even as some schools and colleges reopen, whether the economy will continue to grow despite the health risks, and whether unemployed Americans have managed to put enough in the bank to get them through until their jobs return. The extra $600 per week in unemployment benefits paid from roughly April through July, along with loans to businesses, led to a record increase in personal savings and allowed some households to pay down debts. Some Federal Reserve officials have noted that puts “firepower” in the hands of businesses and households that could tide them over for a while.

Recent data through July, for example, showed overall bankruptcies down 25% over the same seven-month period in 2019.

But the vice may tighten fast. A moratorium on evictions has expired: that means grim choices ahead for families that had used rent money for food or other purchases in recent months.

And the details of the spending report show similarly tough decisions for others, particularly those among the millions who have been laid off from restaurant and hospitality jobs.

High-frequency data has shown that growth in traffic to those sorts of businesses has plateaued, and the July sales statistic backed that up. Americans got their calories and their beer and wine – but from online orders or directly from grocery and liquor stores, not in restaurants, where spending remained 20% off last July’s level.

That means a different labor market emerging that may need fewer workers than before, no guarantee of an easy transition for those caught in it, and a need for more government help to ease the crunch.

The failure to renew benefits will “reverberate across the economy,” analysts from the Washington-based Peterson Institute for International Economics said, with a potential $500 billion drop in personal income following the expiration of government programs causing a jump of as much as 5% in the unemployment rate – back towards the record level hit in April.

The unemployment rate dipped to 10.2% in July after hitting 14.7% in April, with the US economy still about 14 million jobs below where it was before the coronavirus lockdowns began.

Economic policymakers are wary of the evolving dilemma.

“Consumers are still spending,” Dallas Fed President Robert Kaplan said on Friday, noting how the trillions of dollars pumped into the economy by the massive stimulus package passed by Congress in March and programs from the US central bank and others “helped make our economic statistics somewhat better.”

Kaplan said he was worried the risks from a loss of benefits are real given the large number of unemployed workers.

“I am still concerned how quickly they will be able to get back to work,” he said. “If they have to shift industries how long that will take … Not only will you not have a job, will you be able to make ends meet?”