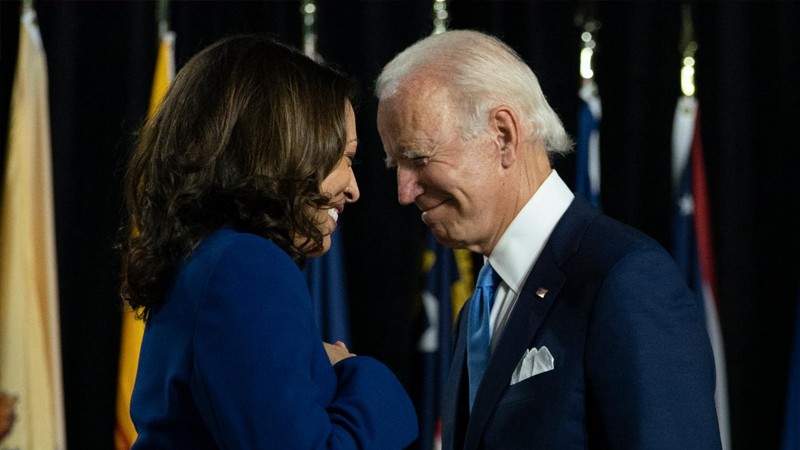 A young lawyer bounds across a parking lot in New Castle, Delaware, a blur of long sideburns, wide lapels and self-assurance. He throws open a door to a beauty salon, and the ladies inside whoop with surprise. It´s clear from the grainy footage that the stylists don´t know this 29-year-old candidate – yet.

“I´m Joe Biden, Democratic candidate for United States Senate,” he announces, shaking the hand of a grinning beautician. “Maybe if you get a chance, you´ll look me over between now and November.”

The pitch, captured in an October 1972 broadcast by WPVI in Philadelphia, is one Biden has made repeatedly since, winning seven terms in the Senate and two as vice president. But throughout his lifetime in politics, his eye has been on the next rung – the presidency — in a quest that failed spectacularly in his first two tries.

On this, his third attempt, the White House is within Biden’s reach at what in some ways seems an improbable moment. At age 77, he is too old to even be called a Baby Boomer at a time when Democrats are prioritizing youth and diversity. But he’s vowing to reset the nation’s compass after four turbulent years under President Donald Trump, staking his claim on the pillars of competence, experience and empathy.

“The moment has met him, right now,” says former Sen. Barbara Boxer, D-Calif. “People know he´s been there, and he´s not going to just stand there. He´s going to do something to make it better. We need that desperately right now. People are scared.”

So Biden is hoping voters will choose him over Trump, like a comfortable blanket, bonded to people by that empathy – and his own history of grief.

“In another time, it might be too late for Joe,” said former defense secretary Bill Cohen, who served as a Republican senator from Maine. “When you see what is happening in our lives, the chaos, they´re looking for someone who can bring some sort of equanimity.”

Biden´s moment accepting the Democratic nomination will be nothing like he imagined when his campaign began. There won´t be thousands of supporters in an arena cheering while he holds Kamala Harris’ hand aloft. With the pandemic´s US death toll nearing 170,000, the event is expected to be a far more somber and smaller affair.

Still, that moment will mark a peak – for now – of a career politician who will try to make the case that the times are so different, and Trump is so disruptive and divisive, that voters will see the president’s rival as a calming alternative.

How Biden developed from a childhood in Scranton, Pennsylvania, to that striving candidate in 1972 and into the nation´s pastoral “Uncle Joe” is a story of cycles of loss, and, most of all, the practice of recovery.

“Get up,” was the motto of Joe Biden´s father, Joe, Sr. It became Biden´s through his childhood struggles with stuttering, the deaths of his wife and baby daughter, a pair of brain aneurysms, and, in 2015, the loss of his eldest son, Beau.

“After the surgery, Senator, you might lose the ability to speak? Get up!” Biden writes in Promises to Keep. “The newspapers are calling you a plagiarist, Biden? Get up! Your wife and daughter – I´m sorry, Joe, there was nothing we could do to save them? Get up!”

In the 1972 campaign, Joe Biden is a snapshot of a candidate rushing toward what seems an unbounded future.

Husband of Neilia, father of three – and owner of a sweet 1967 Corvette in Goodwood Green, a wedding gift from his father, a car dealer – Biden did as many as 10 meet-and-greet events a day. He cast himself in a way that he can´t in 2020: as a new kind of leader, an outsider representing young Americans.

Then, as now, he was betting that voters wanted a change badly enough to oust a sitting Republican incumbent. At the time, it was popular GOP Sen. J. Caleb Boggs, who had been endorsed by President Richard Nixon.

“He was old hat,” William F. Hildenbrand, Boggs’ Senate assistant, described his former boss in an oral history interview in 1985.

On Election Day, Biden wasn´t old enough to serve in the Senate. He would turn 30 on Nov. 20. A photograph from the party in Wilmington captured Neilia helping her husband cut the birthday cake. Towheaded sons Beau and Hunter hover inches away, ready to dig in. He had won the seat by just over 3,100 votes, 51 percent to 49 percent.

A few weeks later, sitting by the fire in their home, Neilia told her husband: “Things are too good.”

The next day – Dec. 18, 1972 – Biden´s world collapsed. The senator-elect was in Washington setting up his Senate office when a tractor-trailer broadsided Neilia´s car. She had been taking the kids to buy a Christmas tree.

Neilia, also 30, and Naomi, 1, were dead. Beau and Hunter, a year and a day apart at 4 and 3, were seriously injured. Except for the memorial service, their father did not leave the hospital. And at least initially, he wanted no part of the Senate.

“For the first time in my life, I understood how someone could consciously decide to commit suicide,” he later revealed.

But he relented to the urging of elder senators. Biden took the oath of office at Wilmington Medical Center just a few feet from Beau´s bed.

The tragedy meant the Senate’s youngest member arrived on Capitol Hill saddled with pain and loss that came to define him. The combination would ground Biden’s operating philosophy in politics and in life, even as it lived alongside his own presidential dreams.

A signature search for “connection” animated Biden´s approach. It helped him identify people who were struggling, and informed his sense of how to call out opponents. Notably, it clued him in on the now-quaint notion of working with members of the opposing party.

“People would have disagreements with him, but he was very likable,” recalls former Vice President Dan Quayle, a Republican from Indiana who served with Biden in the Senate.

Quayle, who served as President George H.W. Bush’s vice president, is backing Trump and Vice President Mike Pence, a fellow Hoosier. He and other Republicans have suggested that Biden’s long reputation of affability is one reason Trump has had trouble defining him with personal attacks such as “Corrupt Joe,” or as a man who “hurt God.”

But Biden’s style has gotten him in trouble, too. His habit as a hugger drew more serious accusations during the 2020 Democratic primaries when a series of women accused him of getting too close. One said Biden assaulted her during his time in the Senate, an accusation he has denied.

His style in many ways reinforced his age and a dated view of appropriate behavior.

When primaries began, Biden was the best known among dozens of hopefuls. But he was not the favorite, particularly given a perception that the party had moved well to his left and his brand of politics had become a relic.

In the end though, largely on the strength of support from Black voters, Biden at last toppled enough opponents to capture the nomination.

Now, the crises over public health, economic collapse and racial justice have created a climate where his personal traits contrast effectively with Trump’s, and so far, he has maintained a perceptible edge in polls.

Biden has accentuated the differences. He attended a memorial service for George Floyd in Houston. He wears a protective mask in public. And he meets with small groups of Americans brought low by the crises.

Decades before President Bill Clinton said he could “feel your pain,” Biden already had lived it.

The Senate was Biden´s healing road.

It´s where he matured as a father, a lawmaker and a politician. And it´s where he began weaving his personal story into politics.

He also took onboard the relationships and lessons as he rebuilt his life.

Lesson No. One: Other people can help. The old bulls – Hubert Humphrey, Ted Kennedy, Mike Mansfield, Ernest Hollings, Tom Eagleton, Ted Stevens – invited their new colleague to join them at monthly power dinners that were then a mainstay of Washington social rituals.

“I was a kid, I was single, and they included me,” Biden recalled from the Senate floor in 2009, just before he departed for the Obama administration. “They went a long way toward saving my life.”

Biden was not eager for the dinner circuit; he spent his evenings commuting home by train to Wilmington to keep watch on his sons.

In the Senate, he was difficult to label. He was a civil rights advocate in a chamber brimming with segregationists. A year in, he had supported a bill to subsidize federal general election campaigns and place a cap on campaign contributions and spending. In 1975, he broke from liberal ranks on school busing, winning Senate endorsement of an amendment forbidding the government from requiring busing except in certain cases.

Along the way, he had begun to rise with a reputation for listening and believing that the Senate can do important things.

In 1977, he married Jill Tracy Jacobs, an English professor at Delaware Technical and Community College. President Jimmy Carter chose him to lead a Senate delegation to Moscow for the Strategic Arms Limitation Treaty. In 1981 the Bidens welcomed a daughter, Ashley.

Throughout this period, Biden honed his ability to read people and when necessary, disarm them. “´Don´t bullshit a bullshitter,´” Biden told a Russian official during private talks in 1984, recalled Cohen, the Republican senator from Maine.