In struggle to land a blow on Biden, Trump toys with nickname change 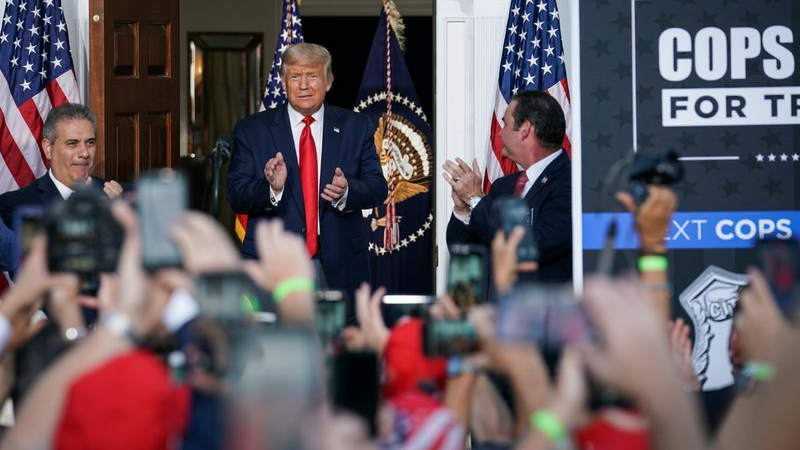 US President Donald Trump, who has used belittling nicknames to describe his opponents throughout his political career, toyed with a name change on Friday for his Democratic rival in the Nov. 3 election, Joe Biden.

Unable to hold his signature large campaign rallies because of the pandemic, Trump brought about 300 police officers who support his re-election bid to the open area outside the clubhouse at his Bedminster, New Jersey, golf club.

Trump polled the crowd on whether he should stick with “Sleepy Joe” or change his nickname to “Slow Joe.”

Trump, 74, has frequently sought to sow doubts about Biden’s competence due to his age, 77, a strategy that appears to have had little effect as Biden has held a consistent lead in the polls nationally and in many battleground states.

“What’s better, Sleepy Joe or Slow Joe?” Trump asked the crowd. “I go back and forth.”

He polled the crowd on which name the audience liked better. Sleepy Joe got louder cheers.

“That’s what I thought,” said Trump.

He added: “I got all these guys telling me… ‘we don’t like ‘sleepy’ because it’s rude, we’re talking about the president of the United States.’ I’ll tell you one thing, (Russian President Vladimir) Putin and (North Korean leader) Kim Jong Un and President Xi (Jinping) of China, they’re not sleepy…. We can’t have slow, sleepy people dealing with them.”

Trump has struggled to find a consistent line of attack against Biden, who is well known to Americans after a career in the US Senate and eight years as vice president.

Trump used his speech to promote a law-and-order theme in the wake of racial justice protests that erupted in the wake of the death in police custody of an African-American man, George Floyd, in Minneapolis, Minnesota. Trump is to make a campaign stop in Minnesota on Monday, where the topic is likely to come up again.