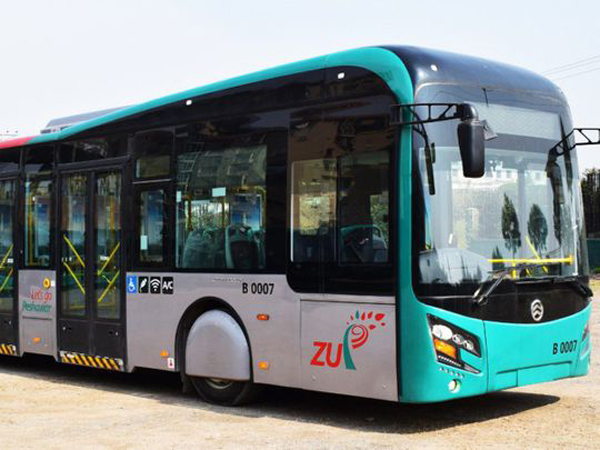 In a recent viral video, unruly passengers can be seen vandalising the Bus Rapid Transit stations in Peshawar just a day after the PTI’s landmark project was inaugurated by Prime Minister Imran Khan.

In the viral video on social media, a man can be seen climbing the top of the BRT bus and at one spot, a crowd of people can be seen jumping over the fences placed around the buses’ route.

A day ago, PM Imran had inaugurated the project and said that while he had reservations about transit projects earlier, former chief minister KP Pervaiz Khattak had ultimately allayed his concerns.

“A good transport system benefits everyone,” said the prime minister, hoping that the system will reduce commute costs for daily travellers.

“Our aim is to make the lives of common people easier. The cost of Rs10 to 50 is enough and doable by daily wagers,” said PM Imran.

He said that tickets for students will be introduced so it is easy on their pockets and will aid in mobility as well.

PM Imran expressed satisfaction over the eco-friendly aspect of the transportation medium, noting that the buses are being run on a hybrid fuel source that will reduce pollution as well.

SSP Operations Peshawar, in a statement, said that police personnel have been deployed across all the stations of the newly-inaugurated BRT service.

The official said that every station will have four policemen for its security, adding that 240 personnel will be deployed for the project in two shifts.

Police can also do patrolling to deal with any untoward situation, said the SSP, adding that the focal person will be monitoring things from the control room of the BRT.

The Rs70 billion BRT project consists of a 27.5km main track and 31 stations, while the length of the feeder routes is 62km and has 146 stops.

The main track is connected to seven different areas of the city so that the people can travel from their areas in small buses to reach the main route. Three mega commercial plazas will be completed as part of the project in June 2021, but the bus parking areas are ready.

The Asian Development Bank (ADB) and AFD had provided loans amounting to $593 million loan for the project, while the remaining amount was provided by the provincial government.