‘Project Power’ — superheroes, only a pill away

* With that line-up, what could go wrong? 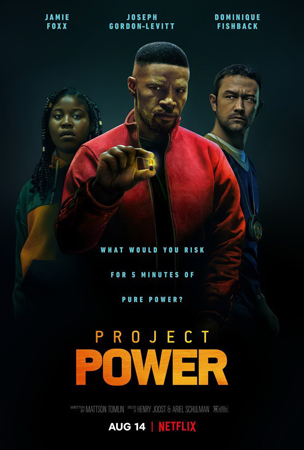 Set over a day and night in New Orleans, ‘Project Power’ pivots on a hot new street drug called Power that you swallow like a pill and kaboom!

You’re a superhero. Well, you’re a superhero for five minutes … and the damn thing can kill you. No pill creates the same result; it’s unique to each user. One customer may suddenly be able to run 45 mph, another can grow bulletproof skin, and still another can become invisible. If you want to buy a couple of pills – they’re $500 a pop – you can take out an enemy, a city or even topple governments. Teleios, the shady agency behind Power, will sell to the highest bidder. Think of the possibilities.

First-time screenwriter Mattson Tomlin sure did. He cooked up his idea in a coffee shop in 2016 when he was just 25 and now he’s an in-demand screenwriter working on The Batman and the film adaptions of the comic book series Memetic and the videogame Mega Man. Project Power attracted big names in Jamie Foxx and Joseph-Gordon Levitt and directors Henry Joost and Ariel Schulman, the Catfish dudes who made identity fraud a cautionary digital pastime.

For the caring part, thank the actors. Oscar winner Foxx is Art, aka the ‘Major,’ an ex-soldier the authorities think is behind the drug. He’s actually pursuing a more personal agenda. Gordon-Levitt is Frank Shaver, a local cop trying to nail the Major

With that line-up, what could go wrong? Plenty. But a lot goes right as well. The movie bats around Tomlin’s intriguing idea, i.e. exploiting disenfranchised millennials as guinea pigs for a drug the higher-ups can use for control. It’s too bad that Joost and Schulman, who bill themselves as Henry and Rel, can’t stick the landing, which was the same nagging drawback that afflicted their otherwise promising 2016 thriller Nerve about an online game that goes south. Still, until the final third, they direct this action flick for maximum intensity tempering the blazing action on the streets of NOLA with surprising heart.

For the caring part, thank the actors. Oscar winner Foxx is Art, aka the “Major,” an ex-soldier the authorities think is behind the drug. He’s actually pursuing a more personal agenda. Gordon-Levitt is Frank Shaver, a local cop trying to nail the Major. And Dominique Fishback steals scenes right out from under both of them as teenaged Robin, a wannabe rapper who’s dealing the drug on the streets to pay for her sick mother’s operation. She’s a livewire who dodges clichés with the skill of an Olympian, relying on her own power as an actor, singer and electrifying screen presence.

And there’s fun to be had in watching the young woman bring out the Clint Eastwood in Frank. Better yet, Fishback and Foxxn – two African-Americans taking the lead in a possible franchise – are dynamite. They achieve a bracing, believable rapport that adds emotion to the subplot about the Major’s daughter, Tracy since Tracy can achieve Power without taking a pill.

There’s no question that Project Power is borrowing from other movies, such as Bradley Cooper’s underrated Limitless and elements from the Marvel and DC Comics universe. We’re definitely in Fantastic Four territory when Colson Baker, a.k.a. rapper Machine Gun Kelly, shows up as a pusher the pill turns into a human torch. What’s new is the way Henry and Rel lay off the CGI whenever possible to show off practical effects. Frank, who samples Power to get on an even keel with the pill poppers, has a showy moment when a bullet hits him in the temple causing his cheek to ripple in waves. How’d they do that? A prop gun shot a pinpoint of high pressure air onto his skin to create the effect. And it’s smashing.

Still, even visual dazzle – props to cinematographer Michael Simmonds – can’t save a scenario that stumbles with sermonising and a convoluted climax on a cargo ship called Genesis that enervates more than it enlightens. Till then, the movie keeps the excitement percolating – check out the chase scene in a burning building – while providing a forum for three terrific actors to bring humanity to what could have slid by as comic-book fantasy. Whatever this eye-popping head trip lacks in plausibility, it makes up for in flash and a sense of a world spinning off its axis.