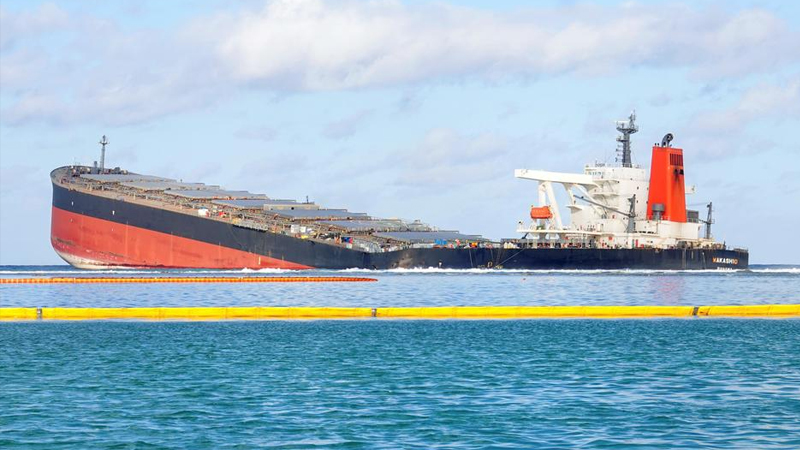 Some corals have lived for centuries at the fringes of Mauritius. Now smothered for days in heavy fuel oil spilled from a wrecked Japanese tanker nearby, parts of those reefs may be in trouble.

The full impact of the toxic spill is still unfolding, scientists say. As the Indian Ocean island’s residents scramble to mop up the oil slicks and clumps, they are seeing dead eels and fish floating in the water, as fuel-soaked seabirds limp onto shore.

Satellite images also show the 1,000 tonnes of spilled oil spreading northward along the coastline from the spill site in the turquoise waters of Blue Bay Marine Park.

The damage, scientists say, could impact Mauritius and its tourism-dependent economy for decades.

“This oil spill occurred in one of, if not the most, sensitive areas in Mauritius,” oceanographer and environmental engineer Vassen Kauppaymuthoo told Reuters by telephone from the island, where he was surveying the disaster. “We are talking of decades to recover from this damage, and some of it may never recover.”

The wildlife at risk include the seagrasses blanketing sand in the shallow waters, clownfish darting around coral reefs, mangrove trees corralling the coastline with their tangled root systems, and the critically endangered Pink Pigeon, endemic to the island. Giant tortoises slow-walk through a nature reserve on the nearby islet, Ile-aux-Aigrettes, where there is also a scientific research station. Altogether, Blue Bay Marine park counts 38 types of coral and 78 species of fish. The spill brings “a massive poisonous shock to the system,” said Adam Moolna, an environmental scientist from Mauritius who lectures at Keele University in Britain. “This oil will have cascading effects across the webs of life.”

The spill came from the Japanese-owned MV Wakashio, which rammed into a reef in the marine park on July 25. It is still unclear why the ship was sailing so closely to the coast. About a week later, oil began gushing from the cracked vessel.

However, the flow had been stopped, authorities say, after they pumped the remaining oil from the ship.

On Thursday, the ship’s owner Nagashiki Shipping said it would face up to its liability and assess compensation for the disaster.

Already, about 15 km of coastline have been affected by the spill, said Mauritius Marine Conservation Society President Jacqueline Sauzier.

“We don’t have the equipment or the expertise to remove the oil, and time is of the essence to limit the damage,” she told Reuters. Local residents are wading unprotected into the toxic waters, while using human hair as well as husks from sugar cane factories to quickly soak up as much of the spill as they can.