Pakistan heading towards an era of development: president 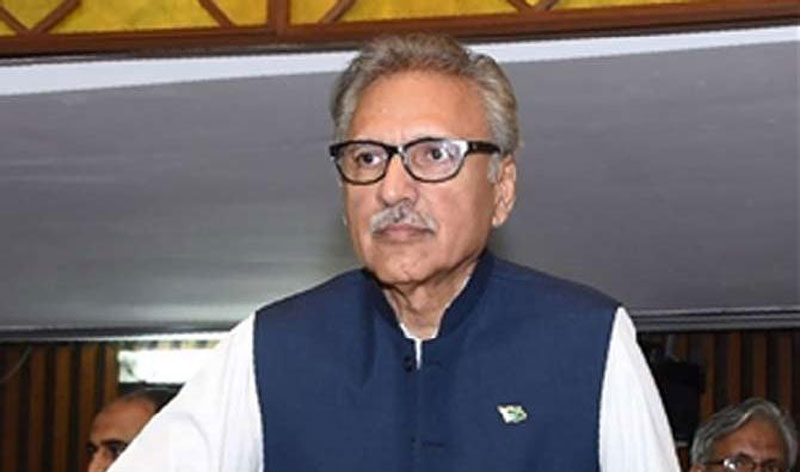 “The direction Pakistan is heading to, is an era of progress. The silver lining starts emerging. On this August 14, I dedicate, that Pakistan has come across a turning point where we have realized our strength to achieve a lot,” the president said addressing the flag hoisting ceremony at Aiwan-e-Sadr to mark 74th Independence Day of Pakistan.

Started with recitation of Holy Quranic verses by renowned Qari Sadaqat Ali after national anthem, the ceremony marked hoisting of national flag by the president.

Addressing the gathering, the president recounted numerous achievements made by the Pakistani nation during the recent years and also highlighted the things-to-do as prerequisite for a bright Pakistan.

Starting from defeating terrorism and extremism, hosting millions of refugees, sticking to stance of peaceful neighborhood despite Indian provocation and onslaught against corruption to the downturn of COIVD-19, he said the nation had surmounted numerous challenges in the recent past.

As the national leadership gathered at the main Independence Day ceremony at the Presidency, outside on the roads of Islamabad, there were youths wearing independence themed dresses rejoicing the occasion with their bikes and cars draped in national flags, faces painted in green and white and and sounding noise-making trumpets. The president paid tribute to the armed force for purging the country of terrorism – a challenge which the west could not surmount. He said Pakistan had become an example for the world in fighting out the terrorism and extremism.

He said Pakistan had generously hosted millions of refugees unlike many western countries who were even reluctant to host a hundred of them and in some instances, even they let them drown in the ocean.

The president recalled that following the Indian attack on Pakistan last year, the whole Pakistani nation followed the suit of national leadership to desire for peace contrary to Indian media and politicians creating provocations.

He appreciated the parliament and the judiciary for getting tough against corruption, though he believed it was an uphill task to cleanse the society of deep rooted scourge.

He said despite many discouraging notions, the nation showed unprecedented discipline and flattened the curve by strictly observing anti-COVID SOPs.

He said Pakistan was only Muslim country to allow Tarawih prayer in Holy Ramazan and also opened up construction industry to keep up the economic activity and avert the deaths due to COVID-related hunger.

He hoped that the nation would continue adhering to the social distancing even during the upcoming mourning rituals in Muharram as the pandemic was not yet over.

“After reaching age of 74 years…this kid is growing young. In order to boost its morale, I am highlighting the glad tidings here. Pakistani nation is arising. This is a tipping point,” the president said.

He also appreciated government’s flagship Ehsaas Program that had assisted above 16 million people amidst the pandemic.

He said taking advantage of technology, the government improved its education and health infrastructure and imparted education to children through television during the pandemic.

He also recounted the government’s achievements on economic fronts despite the pandemic including the sharp decline in current account deficit, surge in revenue and improved stock market reflecting investors’ confidence in policies particular incentive package for construction.

Regarding the Indian illegal actions of August 5 last in Indian Occupied Jammu and Kashmir (IIOJK), the president said the neighboring country tried to distort the history through unilateral actions.

He said the Indian minorities were faced with injustices particularly after amendment in citizenship laws.

He also appreciated the government for introducing new political map of Pakistan according to the vision of Allama Muhamamd Iqbal and Quaid-e-Azam Muhammad Ali Jinnah.

He said having achieved on so many fronts, the nation was yet to do more to protect women rights particularly the inheritance rights.

He said Pakistan desired Afghan peace as it would be the second major beneficiary of peaceful Afghanistan. The CPEC was bringing about social development in the country that would ultimately lead to poverty alleviation.

The president particularly advised to youth to remain attached to their roots of being a Pakistan and Muslim what he believed were the strength of any nation against any challenge.

The event also marked the playing of national anthem by military band and national songs by Ali Abbas and Hina Nasrullah while in the backdrop were the running visuals of Pakistan’s landscape, architecture and prominent figures like Nobel laureate Malala Yousufzai, computer scientist late Arfa Karim and filmmaker Sharmeen Obaid Chinoy and others.