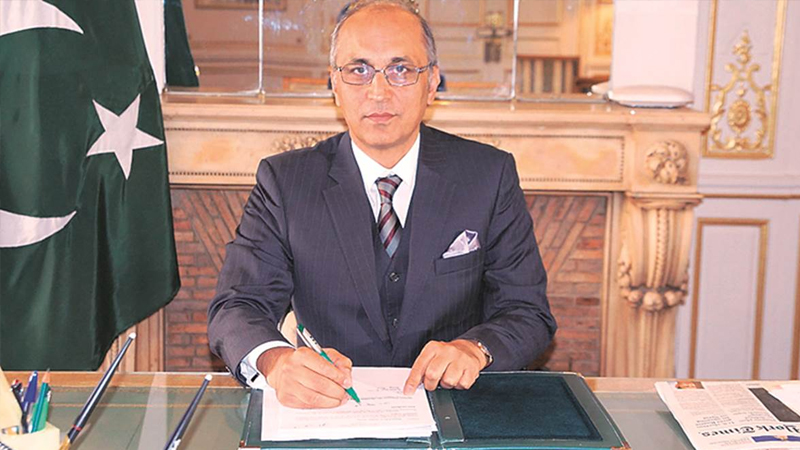 Pakistan Ambassador to China Moin ul Haque said on Friday that investing in hydro projects is central to the Government of Pakistan’s vision for sustainable growth and socioeconomic development.

Pakistan has a large population and major agricultural economic base, and these dams are vital for better management of Pakistan’s water resources. “Given the uncertainties posed by climate change, these projects are also significant for our national security,” he said in an interview with Global Times on occasion of Independence Day of Pakistan.

On the economic side, these projects would also contribute to job creation, skills development and transfer of technology. Their hydroelectric component would help instigate climate change efforts, lower the overall cost of electricity thus enhancing Pakistan’s overall economic competitiveness, he added.

Ambassador Moin ul Haque remarked that Pakistan and China have a long history of cooperation in the hydro sector, and expressed his happiness to see the Chinese friends in the vanguard for these projects as well.

“So, the benefits of the hydro projects are quite evident and debunk the so-called “debt-trap” conspiracy theories,” he added.

He said that China and Pakistan are iron brothers and all-weather strategic partners and added, “For the last 70 years, our relationship has been carefully nurtured by the successive governments and the peoples of the two countries. It has stood the test of time. No schemes of our adversaries could impact this historic and close relationship. Let there be no doubt about this.”

To a question about the development of Gwadar Port, he said, it is a “crown jewel” of the China-Pakistan Economic Corridor (CPEC) and the Belt and Road Initiative (BRI). It is also a major node outside China where the overland Silk Road Economic Belt and the 21st Century Maritime Silk Road converge.

Over the past two decades, and especially since CPEC’s advent in 2013, Gwadar has been transformed from a remote fishing town into a fully functional port with modern infrastructure. A number of projects are underway to further enhance Gwadar’s business environment and competitive edge as a hub of regional commerce, industry and logistics. These include the East-Bay Expressway, as well as a new international airport and power plant, among others.

In recent months, the port’s operations have continued to increase steadily, and it has been also cleared for transshipment to Afghanistan.

This continued development has been made possible by the consensus of both countries’ leaders to take Gwadar as a priority area of our cooperation, address development gaps, and create better lives and livelihoods for the local people. “Chinese enterprises and their Pakistani partners have made enormous efforts, and we are encouraged to see Gwadar develop into a major regional port,” he added.

To a question about management of debt in future, he said, the borrowing is done by all the countries of the world to meet their economic and development needs. Pakistan is no exception.

Pakistan’s national debt should also be seen in the context of the unprecedented and unique security and economic challenges that the country had to face in the last few decades. “Our policymakers thus had to balance between essential security requirements and pressing socioeconomic needs,” he added.