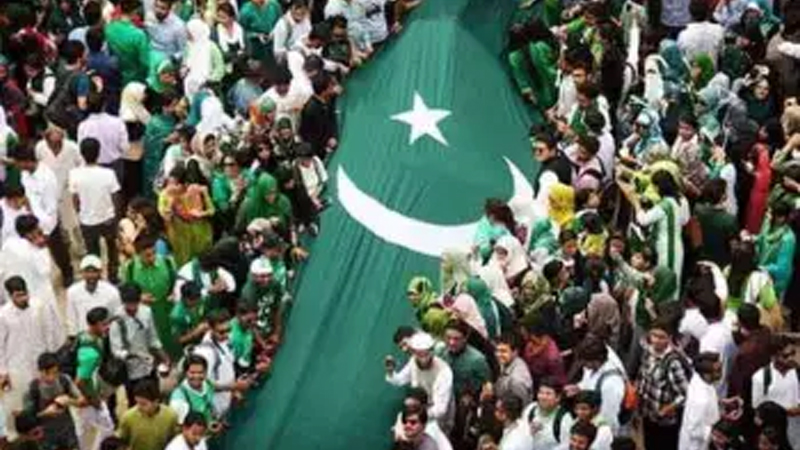 The 74th Independence Day of Pakistan marked with a flag hoisting ceremony was celebrated at the Embassy of Pakistan in Beijing here on Friday.

The event showcased patriotic fervor wherein the valiant struggle of our founding fathers was remembered, and homage was paid to the martyrs to win and secure a separate homeland for the Muslims of sub-continent.

The ceremony began with the recitation of verses from the Holy Quran. Pakistan Ambassador to China, Moin ul Haque then raised the National Flag to the mesmerizing tune of the national anthem.

Deputy Head of Mission, Ahmed Farooq read out the messages of President and Prime Minister of Pakistan for the occasion.

President Dr. Arif Alvi in his message said that, “Unlike the past, this Independence Day is being celebrated in extraordinarily difficult times as the entire world has been affected by Coronavirus which had adverse impact on all sectors of life, i.e. including economy, health, and education.

The President further said that we should not forget our brothers and sisters of Indian Illegally Occupied Jammu and Kashmir (IIOJ&K), and assured them that “Pakistan would continue to support them in their just struggle for their Right to Self-Determination as enshrined in the United Nations Security Council (UNSC) resolutions”.

Prime Minister Imran Khan in his message said that, “This auspicious occasion is a moment to reaffirm our pledge to continue pursuing the vision of Father of the Nation.

The day is an occasion to pay tribute to all those sons of the soil who laid their lives while defending and protecting territorial as well as ideological frontiers of the motherland.

The Prime Minister also reaffirmed support for the Kashmiri brethren stating that, “We will continue to raise voice of the helpless Kashmiris at all available forums. I am confident that the struggle and resilience of brave Kashmiris will culminate into their inalienable right of self-determination”.

Ambassador Moin ul Haque in his address also paid tribute to the leaders of Pakistan movement and their struggle and sacrifices. He stated that it is now our collective duty to fulfill the vision of our Quaid through “Unity, Discipline and Faith”, to make Pakistan a peaceful and stronger country.

The Ambassador also highlighted the importance of Pakistan-China friendship and said that both countries share the dream of development, peace and security in the region. The China-Pakistan Economic Corridor heralds prosperity for our future.

The Ambassador also expressed solidarity with the people of Indian Occupied Jammu and Kashmir and assured them of unwavering Pakistani diplomatic, politically and moral support. All officers and staff of the Embassy along with their families and members of the Pakistani community attended the ceremony.