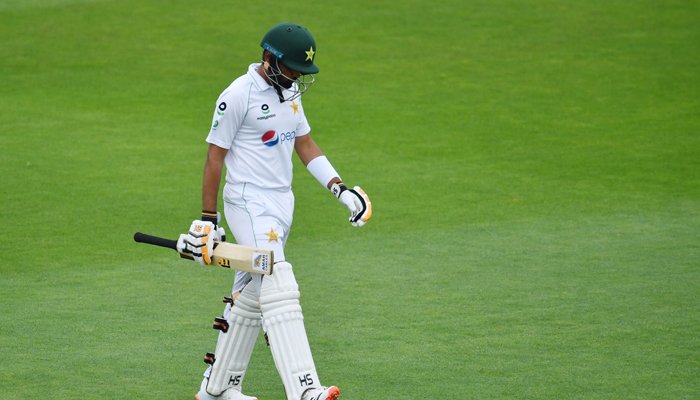 SOUTHAMPTON: Pakistan’s Babar Azam and Mohammad Rizwan got through an awkward one-hour session in the second Test at Southampton on Friday as they denied England a fresh breakthrough.

At lunch on the second day, Pakistan were 155-5, with star batsman Babar 45 not out and wicketkeeper Rizwan 12 not out.

After rain delayed Friday’s scheduled start by 90 minutes, Pakistan were left with 60 minutes to bat in a morning session extended by half an hour.

They resumed in trouble at 126-5, with no more specialist batsmen left to come in.

Babar was then 25 not out and Rizwan unbeaten on four.

But in overcast conditions that, even with the floodlights on full beam, made batting difficult against England’s four-man pace attack, the Pakistan duo held firm in Friday’s first session that comprised 15.2 overs.

Babar also showed his class with the occasional stylish clip through midwicket.

Pakistan, already 1-0 down in a three-match series, had seen captain Azhar Ali win the toss and bat on Thursday.

The tourists, however, lost three wickets for 18 runs in 6.1 overs on a rain-shortened first day where the humid atmosphere aided England’s pacemen.

Pakistan’s plight would have been worse had not opener Abid Ali been dropped twice in the slips on the way to making 60.

Meanwhile left-handed batsman Fawad Alam saw his near 11-year wait for a Test recall finish with a four-ball duck, his five-minute innings ending Thursday when he was lbw on review to Chris Woakes.

Alam had replaced Shadab Khan, unlucky to be dropped after making 45 and running England ragged in a century stand with Shan Masood during Pakistan’s three-wicket defeat in the first Test at Old Trafford last week.

England great James Anderson led the hosts’ attack on Thursday with 2-35 from 15 overs as he moved to within eight wickets of becoming the first paceman to take 600 in Tests.