Pakistan has conferred the highest civil award of the country, Nishan-e-Pakistan, to Kashmiri leader, Syed Ali Shah Geelani, for his services and sacrifices against oppression in Indian-occupied Kashmir. 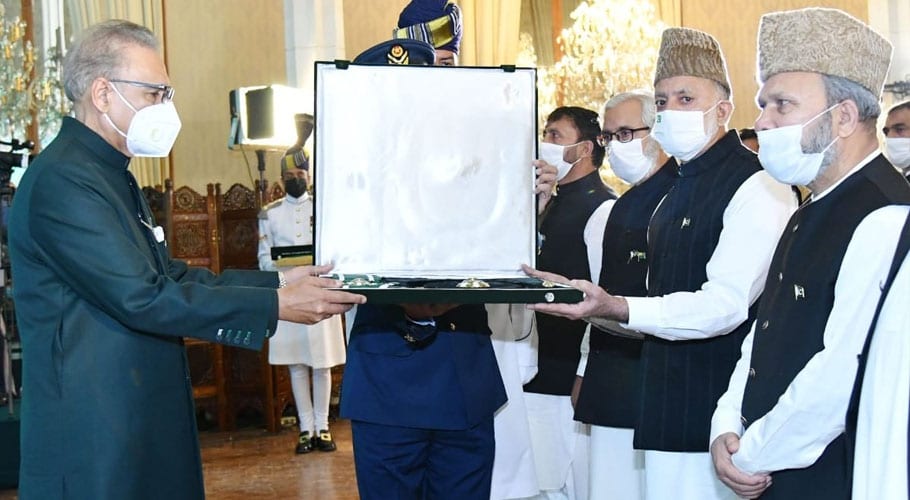 The award was received by the Hurriyat leaders of Azad Jammu and Kashmir on behalf of Syed Ali Geelani during an investiture ceremony at the President’s House in Islamabad.

Kashmiri leader Syed Ali Geelani has been recognised for his struggle spanning over decades for the right to self-determination of Kashmiri people.

Pakistan is celebrating 73rd Independence Day and had announced to confer the award on the veteran Kashmiri leader who recently resigned from the All-Parties Hurriyat Conference.

In his message, President Alvi stated that the country was observing it as ‘Kashmir Solidarity Day’ after India’s illegal attempt at the annexation of the occupied territory.

“I assure the resilient people of Indian Illegally Occupied Jammu & Kashmir that Pakistan will continue to support them in their just struggle for their Right to Self-Determination as enshrined in the United Nations Security Council resolutions,” he said.

Public and private buildings as well as streets bazaars and markets have been profusely illuminated. National flags, buntings, portraits of founding fathers, posters and banners are also seen everywhere as part of the celebration of Independence Day.