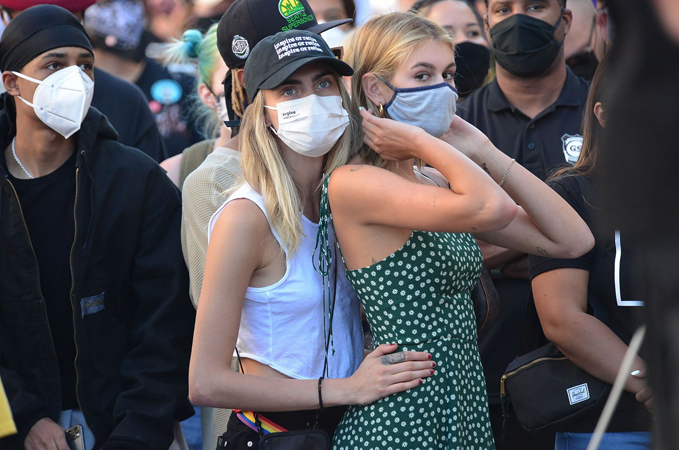 Putting their best foot forward! Cara Delevingne and Kaia Gerber just proved they’re closer than ever after showing off their matching tattoos.

“Happy birthday to my solemate,” the 18-year-old captioned one post, alongside a photo of her and Cara’s feet and hands interlocked. In another image, Kaia shared a close-up of her and the actress’ new ink.

“Solemate” was written in black at the arches of their feet.

Those weren’t the only tributes Kaia uploaded to the ‘Gram. “The only person who wears my face on a sweatshirt,” another message read, which showed the Carnival star rocking a white hoodie that had the model’s face and name plastered on the front.

“The best protest buddy,” Kaia wrote in the following post. For that, she uploaded a picture of her and Cara attending a Black Lives Matter protest in July.

‘Happy birthday to my solemate,’ the 18-year-old captioned one post, alongside a photo of her and Cara’s feet and hands interlocked. In another image, Kaia shared a close-up of her and the actress’ new ink

At the time, the two attended the protest along with dozens of others in downtown Los Angeles. They stood outside the Hall of Justice and documented the events of that day on social media.

In May, the 18-year-old star shared an array of resources with her 5.7 million Instagram followers. “This week has been heartbreaking for so many reasons. but none of this is new. the racism and brutality in this country has been going on for way too long – and it has NEVER been okay,” she wrote in part at the time.

Similarly, Cara took to Instagram to post about the Black Lives Matter movement. “One step forward, but a long way to go,” one message read.

The actress has also been an activist for the environment. “For my birthday this year, join me in demanding Congress pass the Break Free From Pollution Act and put our planet and public health above corporate profit,” she wrote on Wednesday, Aug. 12.

Kaia wasn’t the only one to give a birthday shout out to Cara. “Dear @caradelevingne, man, too much to say. So incredibly lucky to have you as a friend. I love you, happy birthday,” Margaret Qualley said on Instagram.

“Happy burfday bubba,” Joan Smalls wrote on Instagram Stories. “Keep on turning up and shining through.”

Georgia May Jagger shared, “Happy Birthday!!!!! @caradelevingne I love you so much. Can’t wait to be old dog obsessed ladies sitting on the porch with towels on our heads chatting away lol.”

Kaia and Cara have a lot in common and have been friends for quite some time. With their new matching tattoos, it’s clear they have one strong bond!