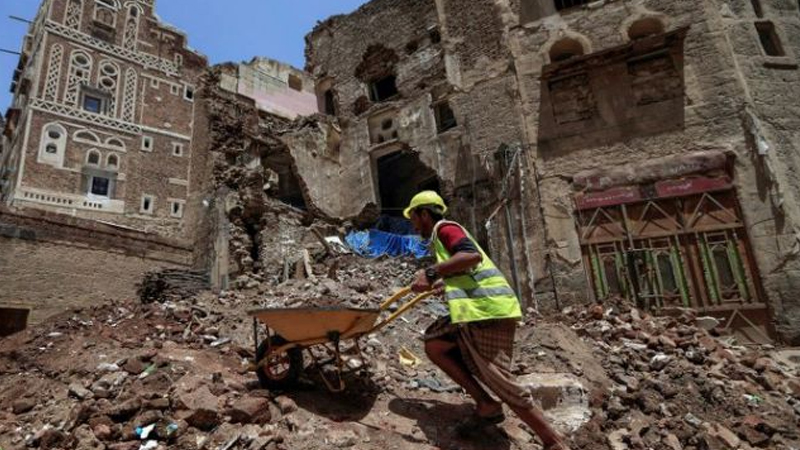 Muddy waters lap overfoot in Sanaa’s Old City, inhabited without interruption for more than 2,500 years but now facing disaster after floods that threaten the collapse of irreplaceable houses.

The deluge risks finishing off the destruction of its distinctive buildings with their ochre brick facades and white latticework windows, experts say. The foundations were already weakened by bombings in Yemen’s long war.

“Since dawn we have been trying to clean the mud off the roofs and drain the water — but it’s no use,” said Ali al-Ward, a long-time resident. “We sleep with fear in the pits of our stomachs. We are between life and death,” said the frail man with a greying beard as he surveyed the damage in the UNESCO World Heritage-listed site.

Flooding is common in Yemen at this time of year, blighting the poorest country on the Arabian peninsula that is in the grips of what the UN calls the world’s worst humanitarian disaster.

The city has since 2014 endured a conflict that pits government forces against Huthi rebels who hold much of the country’s north.

But the flooding has been particularly severe this year. At least 172 people have been killed across Yemen since mid-July, according to official sources and local authorities.

Torrential rains have also threatened other UNESCO heritage sites in Yemen, including in Shibam further east, renowned for its high-rise mud-brick “skyscrapers”.

In the capital Sanaa, 106 buildings, including five in the Old City, have been destroyed so far and 156 damaged, a source at the Huthi health ministry told AFP.

With water still lapping at the fragile structures, many of which have had no maintenance for years, there are fears that others will tumble. “Our homes are made with earth walls. We hope civil society groups will find a solution for us,” said Mohammed al-Khamissi, a young resident of the Old City.

The extent of the damage can be blamed on years of “negligence and a lack of maintenance”, said Doaa al-Wassiei, an official with the authority that manages Yemen’s historic towns.

“Sanaa is literally melting. The bombings which struck the town have made the foundations fragile. The rain has come to finish off whatever was left,” said Wassiei, who is also a member of a heritage protection group.

“Undoubtedly budgets are squeezed because of the war but this is about our identity, and just as we defend our country, so we must defend our identity.” She called for more coordination between government and civil society groups involved in conservation.

The work of those involved in protecting the nation’s heritage was being hampered by dysfunction and a lack of political will.

The 2015 intervention of a Saudi-led coalition in support of the government against the Iran-backed Huthis escalated the conflict on many levels.

Coalition warplanes have been accused of targeting civilians as well as historic sites including the Old City.

The war has claimed tens of thousands of lives, and displaced some three million people. About 24 million Yemenis — four-fifths of the population — are dependent on some form of humanitarian aid.

Shibam, located in Hadramawt province 500 kilometres (310 miles) from the capital, is also on the UNESCO heritage list and like Sanaa has not been spared by the elements.

At least four homes have been completely destroyed and 15 damaged at the 16th-century site dubbed the “Manhattan of the Desert” because of its striking mud-brick towers.

On the ground, labourers have been working to fill cracks in walls.