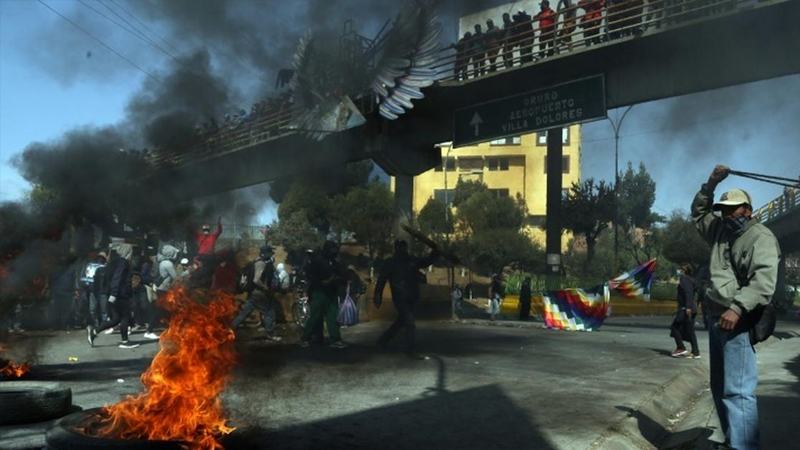 Bolivian authorities denounced the actions of armed protesters as the country entered a 10th day of road blocks that have prevented vital medical supplies needed to fight the coronavirus pandemic from reaching hospitals.

The demonstrators — mostly indigenous people and farmers — are angry that a general election has been delayed for a second time.

Fired up by Morales from his exile in Argentina, they’re demanding it be restored to its previous September 6 date rather than October 18, as set by the Supreme Electoral Court.

On Tuesday, the United Nations, the European Union and the Catholic Church joined forces to call for a de-escalation of political tensions.

On Twitter, Morales backed the call but then accused his political opponents of “racism” and carrying out “massacres,” charges he regularly levels at the government of interim President Jeanine Anez.

His supporters believe the election delay — it was originally due to take place in May but was postponed due to the pandemic — is aimed at preventing Luis Arce, who represents Morales’s Movement for Socialism (MAS) party, from becoming president.

Arce has consistently led opinion polls since he was picked as the MAS candidate in January.

The joint UN, EU and church statement did not single out MAS supporters but urged “the lifting of all undue pressure measures within the framework of a society that wants to live in peace and respect the rules of the democratic game.”

The statement added that this was a time to work towards the common good and “not to put at risk the peaceful, democratic and institutional coexistence between all Bolivians.”

Interior Minister Arturo Murillo said the government supported the move to bring social movements and political parties to the negotiating table to avoid “a civil war.”

On Monday, top military and police chiefs condemned the “terrorism” of armed people manning road blocks and called on political leaders to hold a “dialogue, avoiding confrontational action that could increase the levels of conflict.”

Armed forces General Sergio Orellana and deputy police commander General Ronald Suarez warned against following in the footsteps of other countries in the region like Peru and Colombia that suffered from decades of internal strife.

“There are consultations, certain approaches have been made with one side and the other” to open discussions, said Ricardo Centellas, president of Bolivia’s Bishops Conference. The move from the Church, the UN and EU came after a mediation request from Anez, parliament and the Supreme Electoral Court, a Church source told AFP.