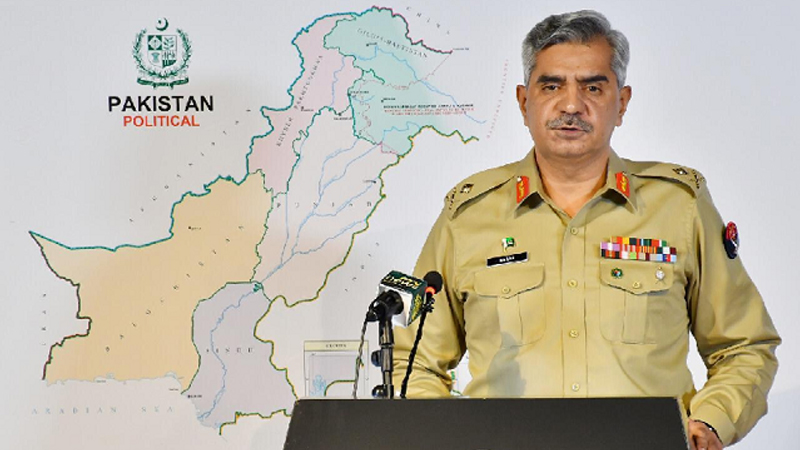 Pakistan Army on Thursday dismissed the notion that Pakistan is realigning its interests in the region and looking to ‘join a new bloc’.

“There are no re-alignments or blocs being joined. No such thing. Rest assured,” ISPR Director General Maj Gen Babar Iftikhar told a press briefing on Thursday. He denied that the country was seeking to ‘join the Russian bloc and leaving US-friendly ties behind in view of pressures from India’. “Let me assure you we are absolutely fine with all our neighbours in the region and our relationship with all our countries we have been engaged with is absolutely fine,” he said. “There is no specific re-alignment as such, but, yes, the world has become much more inter-connected, much more inter-dependent and much more diverse and that’s what this is all about,” he remarked.

When asked to comment on the status of relations with Saudi Arabia and the upcoming visit to the Kingdom by Chief of Army Staff Gen Qamar Javed Bajwa, the ISPR chief said Pakistan is proud of its relations with the ‘brotherly country’. “These relations are historic, very important, have always been excellent and will remain so. There should be no doubt of this,” he said. “Nobody should doubt the centrality of the Kingdom of Saudi Arabia to the Muslim world. Our hearts beat with the people of Saudi Arabia. So there is no need to raise any questions on our relations with one another,” he said, adding that Gen Bajwa’s trip is a planned tour related to military-to-miltary engagements. “There is no need to read too much into it.”

The ISPR chief also rejected the idea that a ‘deal’ on Indian spy Kulbhushan Jadhav would be struck. “Let me assure you we are only abiding by the international rules and regulations on the subject. There is no doubt that Kulbhushan Jadhav is a terrorist who has shed Pakistani blood of innocent lives,” he said. “He is a specific case. After the Second World War, for the first time, a serving officer of any country has been found involved in terrorist activities in another country,” Maj Gen Iftikhar said, adding that the provision of consular access is the requirement of the laws of the International Court of Justice. “Whatever the talk of the town, as if we are trying to enter some sort of deal on that, absolutely not. Absolutely not. We are just fulfilling international obligations. That’s it. Period.”

Speaking of the spy’s fate, he said Jadhav has already been awarded punishment. “That’s a decision that has already been taken. As we proceed, I think everybody will know what the fate is.”

The ISPR chief says Pakistan is concerned about India’s increasing military spending and defence budget, but it remains ‘absolutely ready’ for any aggression despite New Delhi’s recent acquisition of five Rafale fighter jets from France. Responding to a question about the threat posed to Pakistan by the Rafale jets purchased by India, the DG ISPR noted that India’s military spending is the highest in the world and it is also involved in an arms race. “The way the journey of the five Rafales from France to India was covered shows the level of their insecurities,” he said. “Nonetheless, whether they receive five [Rafales] or 500, we are fine. We are absolutely ready and we have no doubt on our capability and we have proven this so it’s (the jets) not going to make much of a difference,” he asserted. “But yes, their defence spending and their budget compared to ours is affecting the conventional balance of the region. And when this happens, things go into another domain and the international community should also look at this,” he went on to say.

“In Pakistan, many say the defence budget is too much; right now we are at 17 per cent [of the budget] distributed between the army, navy and airforce. And in the past 10 years, Pakistan’s defence spending has consistently been going down, not up, and in the past two years, we didn’t even keep the inflation cushion in the defence budget,” he said. “But this does not mean that it has affected our preparedness. Even with these resources, we are absolutely ready to take on our enemies,” he added.

Earlier, in his briefing, the ISPR chief congratulated the nation on the upcoming Independence Day. “Freedom is one of God’s greatest blessings. For this freedom we have, I pay tribute to the people who participated in the Pakistan movement and its leaders, particularly Allama Iqbal and Quaid-e-Azam’s vision,” he said.