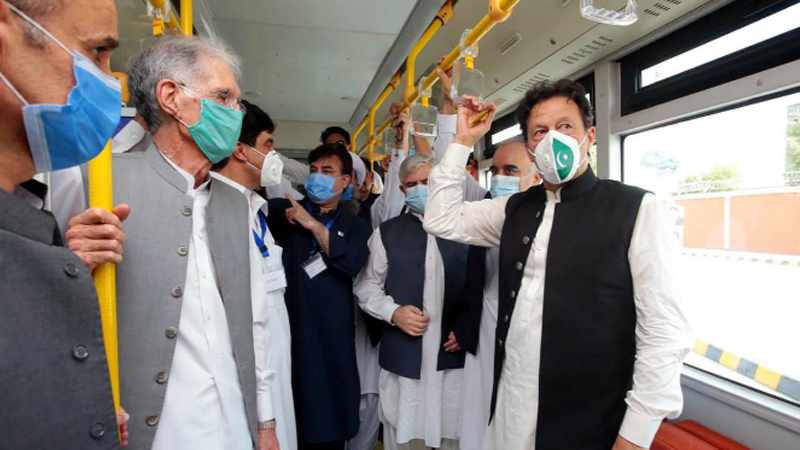 “This is the best metro bus project of Pakistan. Being third generation facility, this is a high-level project among metros (in other cities),” the prime minister said while addressing the inauguration ceremony of the project here.

Congratulating the chief minister and Pervaiz Khattak on completion of the project, the prime minister said it would address the issue of traffic congestion in Pesjawar as the problem at the city’s main artery had been resolved. He said besides a main track of 27 kilometers, the project consisted of 60 km feeder routes that would connect almost whole of Peshawar to the BRT project.

Calling the project ‘a great development’, the prime minister said the modern transport service is the first step towards the development and hoped that the BRT project will help enhance Peshawar’s per capital income and bring about prosperity making the travelling experience easier and comfortable. He said initially he had some reservations on the project but the then chief minister Pervaiz Khattak was stick to his stance of project’s significance and advantages.

“On behalf of all, I want to say, Pervaiz Khattak! you were right and we all proved wrong,” the prime minster said while appreciating the defence minister for the project. He specially lauded the BRT fare list introducing Rs 10 to Rs 50 fare for 27-kilometer journey which, he said, would make it affordable especially for the labourers to move around in search of wage. He said this is the distinction of the PTI government that it always thought of common man while executing any development project. He said besides being an affordable facility for the students, the BRT project would also provide connectivity to the city’s hospitals too thus providing connectivity to whole of the city. He appreciated the idea of introducing the hybrid buses to be fuelled by a mix of diesel and electricity that would help reduce the pollution level.

Earlier, the prime minister was briefed in detail about the project’s features and significance. He also inspected the bus, the control room and other facilities provided for the comfort and ease of the passengers.

Meanwhile, Prime Minister Imran Khan Thursday the country’s first ever Ehsaas Nashonuma Program aimed at preventing the stunted growth of children as 40 percent of children suffer the impaired growth mainly due to poor nutrition. Initially launched in nine districts across the country, the program featured maintenance of data of pregnant and lactating mothers and their under-two year babies besides providing them quarterly stipend and healthy diet. The prime minister also interacted with the beneficiary women of the anti-stunting program as the country stood second in the region for stunting with 40 percent of the children facing stunted growth due to malnutrition or other reasons. A budget of Rs 8.52 billion has been earmarked for the government funded three-year Nashonuma program. The beneficiaries would be provided quarterly stipend of Rs 2,000 for girls and Rs 1,500 for boys. In the initial phase, 33 Nashonuma centers have been established in nine districts including Khyber, Upper Dir, Bagh, Ghizer, Hunza, Kharmang, Kharan, Badin and Rajanpur. The districts have been selected on the basis of prevalence rate of stunting.