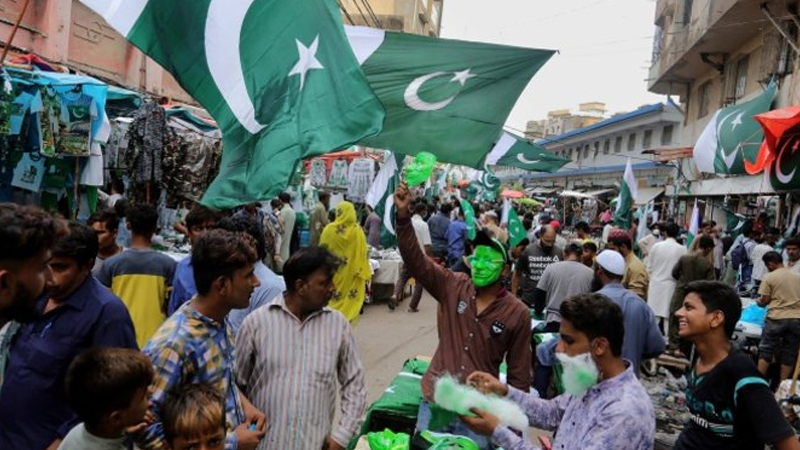 Pakistan is celebrating its 74th Independence Day today amid a slew of economic, diplomatic and health challenges.

The nation of more than 210 million people, which enjoys a geo-strategic location since its inception in 1947, will mark the day amid new regional alignments, a new political map and strengthening partnership with China. Another highlight of the year is row with longtime ally Saudi Arabia because of a ‘lame’ reaction by the Riyadh-dominated Organization of Islamic Cooperation (OIC) to India’s scrapping the longstanding semi-autonomous status of disputed Jammu and Kashmir, Anadolu Agency reported.

The government of Prime Minister Imran Khan is struggling to prop up an ailing economy, which has also been hammered by the novel coronavirus. Although the South Asian nuclear state is among a handful of countries where virus cases have significantly dropped in recent weeks, economists say the effect on the domestic economy will be ‘long lasting’.

The change in disputed Jammu and Kashmir’s special status, and continual clashes between Indian and Pakistani armies along the Line of Control will continue to haunt the already strained relations between the two rivals for years to come, according to observers. According to several human rights organizations, thousands of people have been killed in the conflict, which flared up in 1989.

Recent regional developments, which include rising tensions with India, a rare military clash between New Delhi and Beijing, and the inclusion of Iran into China’s ambitious Belt Road Initiative (BRI), have given Islamabad an opportunity to strengthen its strategic importance. Reconciliation in war-torn Afghanistan would also be a significant challenge for Islamabad, which has successfully courted the warring Taliban to negotiate with both the US and Kabul.