At least three people were killed in India’s Bangalore after a “derogatory” Facebook post about Prophet Muhammad (PBUH) sparked riots and resulted in clashes between police and thousands of protesters on Wednesday. 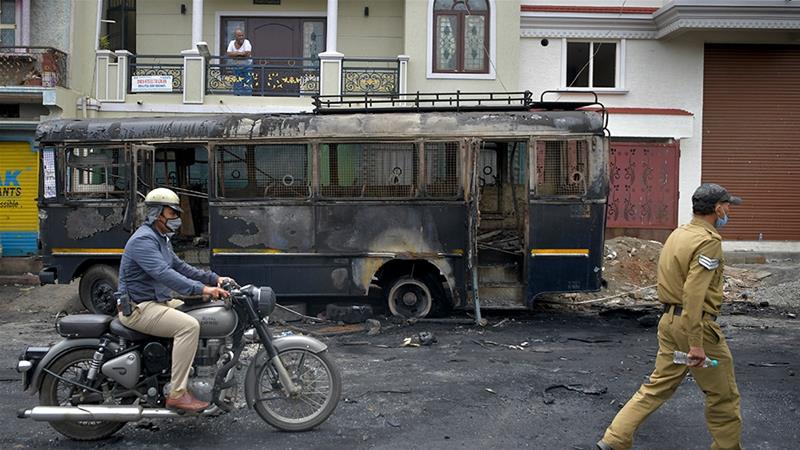 According to media reports, reacting to the post, a mob gathered outside the lawmaker’s house and set two cars on fire.

According to police, 24 vehicles and about 200 motorcycles were set on fire during the riots, while police fired tear gas to disperse the angry protesters, killing 4 people.

Bangalore police say the nephew of a lawmaker who posted an insulting post on Facebook has been arrested, while 110 people involved in the protests have also been detained.

With regard to incidents in DJ Halli, accused Naveen arrested for posting derogatory posts.. also total 110 accused arrested for arson, stone pelting and assault on police. APPEAL TO ALL TO COOPERATE WITH POLICE TO MAINTAIN PEACE.

Navin, the alleged culprit, has been arrested, said the police commissioner. The protesters surrounded the Congress MLA’s house in Bengaluru, and according to one report, Murthy’s house has also been vandalised.

Mufti Muzamil Zikriya, a local Muslim figure, was seen at the spot pleading youths against taking law into their hands and assured those assembled that the police would initiate measures to bring the culprit to book.

However, despite his appeal, protesters set ablaze two dozen cars and 200 bikes kept at a police station. A police station was also damaged in the violence, as per the reports coming in.

The police used lathi-charge, tear gas and firing to disperse the violent crowd.

Police chief Pant said the situation had been brought under control. While a curfew has been imposed in the violence-hit areas of DG Halli and KG Halli till tomorrow morning, large gatherings have been banned in the rest of Bengaluru city.

Bangalore is known as the Silicon Valley of India and is home to a sizable Muslim community among its eight million people.

According to police, an investigation into the violent protests has been launched and CCTV cameras are being used to identify the culprits.