Stories of survival, spirituality and oneness through song 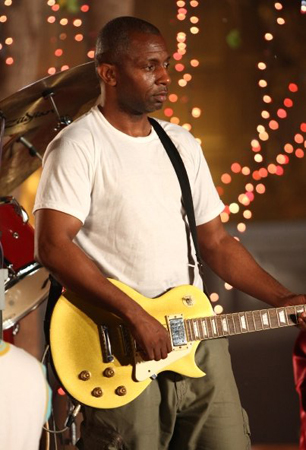 This far-away distant southern land seems to be making giant leaps and becoming the most extraordinary example by embracing innovation and spirituality.

At the forefront of this genre is Mahmood Khan who writes about stories of survival and spirituality and oneness.

Fans and artists around the world would be thrilled to know that Nusrat Fateh Ali Khan’s last tape recordings captured just before his death were found in storage in Oakland, California.

One of the songs was recorded at music producer Rick Rubin’s house in Los Angeles and some of the sessions were taped at Iran’s megastar Morteza Barjesteh’s studio in Encino, California.

The songs were written and developed by Mahmood Khan while working on his solo album during a time when Nusrat was battling kidney disease which eventually took his life in 1998. Mahmood’s sound engineering background had allowed him to install a recording studio at the house he had rented for Nusrat’s stay in Los Angeles, a trip which was prompted by a special invitation from Peter Gabriel and VH1.

These rare recording tapes with an estimated auction value of over 5 million dollars are in perfect condition and contain enough material to produce a new Nusrat Fateh Ali Khan album, a move being considered by Mahmood Khan.

Mahmood is also working on new songs in collaboration with producer David Jones, known for producing songs for Elton John, Bon Jovi, Garth Brooks, and Eddie Murphy/. On this album, Mahmood wants to celebrate his connection with Black America, an experience he holds very dear to his heart and credits his survival due to the lessons learned in the Black music industry. The new sound will be a Jazz influenced orchestral album fused with World music tones utilizing Mahmood’s unique voice and exceptional songwriting.

‘What I have learned about being in music for so long is that the best artists focus on expression. Their magic is being able to express themselves in a unique and powerful way. They create a mood and a feeling with their music. They capture a melody that seems familiar, yet new, and then they take the simplest words that we use every day and put them together in a way that touches our hearts and souls. Finally, they do it so simply that when you hear it, it seems obvious. Mahmood has always had the commitment to becoming a great artist and his music reflects it. He is pushing boundaries and unlocking the secrets, and we get to go with him on his journey. I am proud and happy to be a part of that journey because he is heading to greatness’, said Producer David Jones.

‘What I have learned about being in music for so long is that the best artists focus on expression. Their magic is being able to express themselves in a unique and powerful way. They create a mood and a feeling with their music’

When asked if he considers himself a better marketeer than a songwriter working in Australia, his influences and most used equipment Mahmood replied, ‘ Sure, marketing, and promotions are a crucial element but it all starts from a good artist and good songs. One must never forget the value of good songs. Rest comes but has to be based on a solid foundation which is the song. I spent eleven years locked up in a studio just to develop my songs because I understand the value of a good repertoire. There are no short cuts for this. You must work and work hard and be consistent. Australia is very open indeed. My success here is a good example of its diversity.

As a sound engineer, I am influenced by Mutt Lange, Karl Richardson, and Jon Gass. As a producer by Arif Mardin, Albhy Galuten, Barry Gibb, Michael Omartian, David Foster, and John Farrar. As a musician, I have been inspired by Black music and Gypsy music. On one hand, a groove with only a bass line is what inspires me the most and then, on the other hand, a wall of sound multi-layered with guitars with different tunings and an incredible thick bed of acoustic guitars produces a kind of drone that invokes exceptional melodies in me is what I fall in love with. I love and respect brilliant songwriters namely Paul Simon, Van Morrison, Aziz Mian Qawwal, Barry Gibb, Burt Bacharach and John Denver. As a vocalist, I love Lata Mangeshkar, Kishore Kumar, Robin Gibb, Barry Gibb, and Cliff Richard. Then there are names like Smokey Robinson, Chakka Khan, and Peabo Bryson that carry a lot of weight in my inspirations.

I think Micheal Jackson’s Thriller is hands down the greatest recording of our times. Sonically it is brilliant and the grooves are crisp and funky. I had the honor of working with Louis Johnson who played the bass on Billie Jean. I also was blessed to have worked with Wah Wah Watson, the man who invented the Wah Wah sound. I think this was the single most incredible experience of my career. The most comfortable studio I have ever worked in is ‘Amerycan Studios’ owned by Ray Parker Junior famous for his song Ghost Busters. Also working at Lion Share studios owned by Kenny Rogers at the time was a surreal experience. It is where they recorded ‘We are the world’ and it had the greatest microphone closet.

I also experienced working with Irani Superstars Morteza and Dariush. Morteza has a very special place in my heart. He at one time let me record at his studio for several months free of charge when I was struggling to record my first album.

In terms of equipment, I record vocals with a Neumann U-47 FET for its loudness and Manley preamp for its sweetness. I use Neumann monitors and exclusively use Brianworx plugins. I am really excited to be working with David Jones on the next album. I want to grow as a songwriter and am keen to see how this recent commercial success modifies my sound. I wish to become clearer, crispier, and Jazzy.

In terms of films, I don’t really care for commercial filmmakers and actors because they only serve as salespeople for products and many a times bad products like sugar, cigarettes and guns.