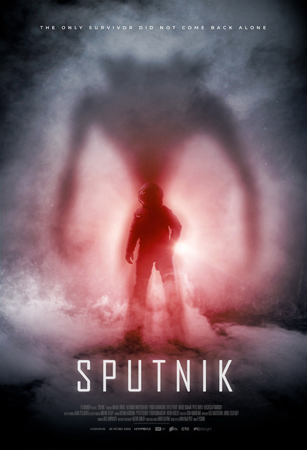 A quick question: How much do you like Alien? Let’s rephrase this slightly: Do you dig Ridley Scott’s masterpiece so much that you’d be perfectly fine watching something that owes a massive debt to it, just to kill time between your 999th and 1000th viewing of the original 1979 groundbreaker? The differences would be subtle – say, an alien slithering out of a host’s throat rather than bursting through his chest, and instead of resembling a walking, hissing penis-head with retractable chrome jaws, it would look more like a skinned bat – but it’d still be familiar enough to temporarily scratch an itch. Also, do lines like “Parasite…or symbiote?” and “On our planet, we are the champions when it comes to fear” fill you with genre-fuelled glee? Even when they are delivered in Russian?

Filmmaker Egor Abramenko’s debut draws from a lot of different sources, including John Carpenter’s The Thing, 1980s body horror, vintage Soviet sci-fi, X-Files reruns, conspiracy thrillers and countless B movies. But the shadow of Scott’s film hangs heaviest over this pulpy mix of creature-feature scares and Cold War paranoia, and the queries above aren’t just idle snark. Never mind the fact that once astronauts Veshnyakov and Averchenko encounter something scaling their ship up in the stratosphere – it may be attracted to the lullaby the former is crooning, although in space, no one can hear you sing – the focus shifts back to terra firma. No haunted house in the cosmos à la the Nostromo, in other words. There’s enough tonal overlap and pages torn out of old playbooks, however, that it helps if you’re so predisposed to this kind of ride you don’t care about the déjà vu.

Set in 1983 – the year two Russian cosmonauts nearly died during a failed launch and the country’s malfunctioning security system nearly triggered a nuclear Armageddon – Sputnik doesn’t waste a lot of time orbiting around. The men’s pod crash-lands in Kazakhstan. The cover story is that these heroes are recovering nicely in a base far outside Moscow. The military brass would like Tatyana Klimova, a maverick psychologist, to talk to Veshnyakov. He’s can’t remember anything that happened before their re-entry, and has been exhibiting some odd behaviour. Which, to be fair, is understandable when you have an otherworldly organism living inside you. The visitor – imagine Dobby the House Elf crossed with a snail – slithers out of its host every night in the wee small hours; according to a general who’s been closely observing this spindly extraterrestrial, it’s bonded with their comrade’s and using his body “like a cocoon.” Maybe it would make a good weapon for Mother Russia. Definitely it’s getting bigger, and hungrier, and learning to adapt at an alarming rate.

You can guess the rest: dodgy folks in labcoats, flashing red lights and sirens, things jumping out of shadowy corners, soldiers turned in to chum, people yelling “Run!” It’s merely a question of how well Sputnik whips all of this well-worn material into shape, which is decently enough. Abramenko has clearly watched his share of gory evil-extraterrestial-run-amuck blockbusters and knows the vocabulary well enough to employ it for shock-and-eww! tactics. Akinshina gives her Ripleyesque heroine an added edge of hardbitten cynicism that plays extremely well and ties in to the film’s notion that truth and trust were rare commodities in the USSR circa ’83.

There’s a slick Hollywood sheen over everything that, in a year in which studio blockbusters have been repeatedly punted, may satisfy a quick summer-movie fix. If this sounds like faint praise, it is. You’ve seen this before. Think of it as a potent dose of sci-fi/horror Methadone to keep the withdrawals at bay.