‘Sadak 2’ trailer fails to impress the Internet amid nepotism row, gets more ‘dislikes’ 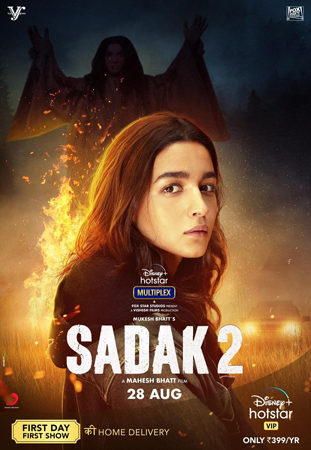 Perhaps for the first time, a film which is headlined by top Bollywood stars has got more ‘dislikes’ on YouTube than the ‘likes’.

Amid the nepotism row, filmmaker Mahesh Bhatt released the trailer of his film ‘Sadak 2’, headlined by Alia Bhatt, Sanjay Dutt and Aditya Roy Kapur, but despite an impressive lineup of stars, the internet didn’t seem to have like it. As of now, ‘Sadak 2’ has over 4 million views with over 2.3 million ‘dislikes’ to just 1,42,000 ‘likes’.

‘Sadak 2’ has been drawing ire on social media since Sushant Sing Rajput’s death on June 14. The insider vs outsider debate reignited on social media with Sushan’s death. A section of the internet also believes that he was a victim of “Bollywoood’s nepotistic attitude towards outsiders.”

Mahesh Bhatt’s ‘Sadak 2’ stars his daughters Pooja and Alia along with Aditya, the youngest brother of producer Siddharth Roy Kapur

Mahesh Bhatt’s ‘Sadak 2’ stars his daughters Pooja and Alia along with Aditya, the youngest brother of producer Siddharth Roy Kapur.

Sushant’s brother-in-law had also launched an app named Nepometer to track nepotism in Bollywood. The first film to have been measured in the app was ‘Sadak 2’ and Nepometer found it to be 98% nepotistic.

The film was rated on the basis of five categories – producer, lead artists, supporting artists, director & writer. “Four out of five categories have Bollywood family members,” the team said in an Instagram post. Soon, there was a call to boycott the film.