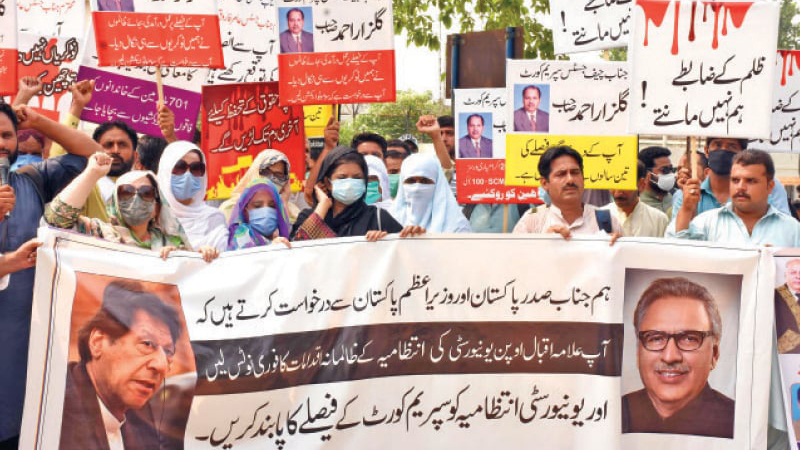 After two-day protest outside the university, the dismissed daily-wage and contractual employees of Allama Iqbal Open University (AIOU) on Wednesday staged a protest outside the National Press Club (NPC) against the discrimination, demanded that the government reinstate them forthwith. Recently, the AIOU administration had terminated services of around 500 daily-wage employees and labourers. Besides this, an additional 200 daily-wage employees were sacked and rehired, due to which they lost their scales, designations and experiences. The protesting employees said that they had been serving in the university for many years and as most of them were overage, they would not be able to find new jobs. They said they were laid off without any justification. They alleged that all of a sudden, the university administration, through verbal orders, terminated 701 daily-wage and contractual employees from service. However, when the issue was highlighted, around 150 people were rehired. So, around 550 people have been terminated from service, which is a great injustice with the poor class.

Vice Chancellor Dr Zia ul Qayyum defended the termination while saying that it was completely justified and not a single employee was discriminated against. “To avoid any kind of injustice, we advertised the all posts and provided everyone equal opportunity either that was AIOU employee or external candidate,” he claimed. “We believe in equal opportunity for each citizen across the country and this is what I also tried to convey to those who are now enraged by the move and went on protest,” the VC explained.

Moreover, a senior administrative employee of the varsity said while wishing anonymity that the employees had been dismissed on the direction of the university’s Executive Council, and claimed that they would be considered for future appointments.

It is pertinent to mention here that during the Covid-19 pandemic, the government had appealed even to the private sector not to terminate services of their employees even though most of them such as factories were either closed or facing productivity shortfalls.