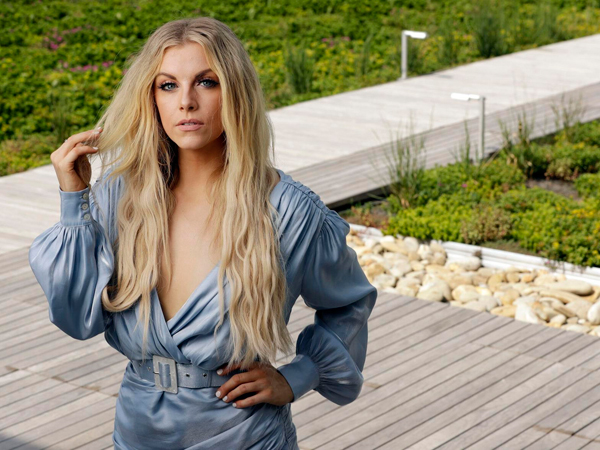 Country singer Lindsay Ell lived alone with guilt and shame for years, but it took seeing herself in the story of another young girl to realize that she didn´t have to be defined by her trauma.

While listening to teenagers talk about their experiences with sexual abuse at a youth center where Ell helped launch a music program, the Canadian-born singer and guitarist heard a 12-year-old girl explain how her parents had sold her into sex trafficking.

“All I want to do is reach out and tell her it´s going to be OK because when I was 13 years old, I would have done anything for someone to hold my hand and tell me that it was going to be OK,” said Ell, now 31.

Ell realized she also had a story to share about her journey through grief and trauma, and she eventually wrote enough to fill a full album. It´s called “heart theory” and it will be released Friday.

Ell, originally from Calgary, Alberta, said in an interview with People magazine earlier last month that she was raped at age 13 by a man from her church and then again in a separate incident when she was 21. The Associated Press generally does not identify victims of sexual assault unless the victim agrees to be publicly identified.

It was a secret gnawing at her for years before she revealed to her parents what happened to her as a child. And as a songwriter and masterful guitarist who has toured the globe playing in front of thousands, she struggled for years to put the words to paper and let the secret out to the public.

“Shame and grief are such heavy feelings and we cannot deal with them by ignoring them,” said Ell. “And I got really good at ignoring those feelings, so much so that it felt like my new normal.”

But the meeting at the youth center years ago made her realize she had an opportunity to reach more people like herself, who had felt broken and alone.

So she called one of Nashville´s most talented tunesmiths – Brandy Clark – the six-time Grammy nominee who has written hits for Kacey Musgraves (“Follow Your Arrow”) and Miranda Lambert (“Mama´s Broken Heart”), and toured alongside Ell. They had never written together until the day Ell asked if Clark would help her write the song “make you,” which directly addressed her sexual assault.

“I felt like my biggest job was to just let her know that it was OK to say her truth,” said Clark. “I was really just trying to help her tell her story in her words, not put too many of my own words in it. And I was really honored that she would be that vulnerable with me and also that she would be that vulnerable with the world.”

Onstage, Ell comes across as confident and exuberant. She is one of the best lead guitarists in contemporary country music after being schooled in blues and rock guitar from an early age and easily holds her own onstage alongside Keith Urban and Brad Paisley. She is nominated for two Academy of Country Music Awards at its rescheduled awards show to be held on Sept. 16, including new female artist of the year and musical event of the year for her duet with Brantley Gilbert, “What Happens in a Small Town,” which became a No. 1 hit at country radio and Ell´s first song to crack the all-genre Billboard Hot 100 chart.

Ell´s “heart theory” concept album is broken down into the seven stages of grief, starting with shock, denial, anger and depression. She wrote with a wide swath of hit Nashville songwriters, including Tyler Hubbard of Florida Georgia Line, Kane Brown, Jessie Jo Dillon and Nicolle Galyon. The 12-track album ends with an uplifting message of acceptance.

Ell started a foundation called the Make You Movement that will provide funds to organizations that focus on disenfranchised youth and survivors of sexual trauma and domestic abuse. And her message has resonated among her fans.

“If I were to open up my DMs right now, I could read you so many incredible stories and so many heartbreaking stories,” said Ell. “The fact that fans feel connected enough to me that they want to bare their souls and share these things that some people have not even ever told to anybody before, I feel just such a gratitude to their humility and wanting to share that with me.”

Just as she wanted the song “make you” to end on a point of healing and recovery, Ell said she´s learning every day how to turn her pain into strength.

“When you fully accept these things, it´s going to make you have a deeper appreciation than you ever have,” said Ell. “I truly believe that it´s the things that bend and stain and break us is what make us who we are.”