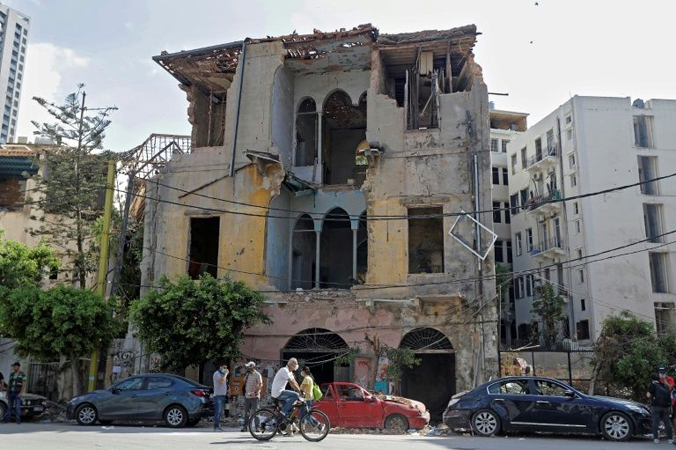 Tanya can’t be alone in a room. Carla, for days, thought a war was starting. Survivors of Beirut’s August 4 blast are still in shock over a disaster that disfigured their city.

The earth-shaking explosion killed 171 people and wounded more than 6,000, a sickening blow to a country already in crisis.

Almost every generation in Lebanon has experienced some kind of conflict, whether the 1975-1990 civil war or the 2006 hostilities with Israel.

Those episodes are over, but for some the traumas they left are still vivid — and last week’s explosion has added yet another scar to the collective psyche.

Carla was on her balcony in an old Beirut neighbourhood when she felt her building shake.

“I initially thought it was an air raid because I associated the noise with what I remembered from the 2006 war,” the 28-year-old told AFP. After the explosion pulverised her windows, she rushed to the stairwell, petrified.

But before Carla could pull herself together, her elderly neighbour, who had survived the 1975-1990 civil war, was already busy sweeping the floor.

“This is a reflex from the war, whenever something breaks they just sweep it up,” Carla said.

She is now staying with her family, and said she is not emotionally ready to move back to her blast-hit home.

Even at her parents’ house, she cannot sleep.

“A car driving by on the street becomes the sound of an airplane,” she said in English.

“Everything now triggers memories of the 2006 war… I had never realised how much that war actually had traumatised me.”

Doctors of the World, an international charity, spent several days in the levelled Karantina district, overlooking blast site. Its staff knocked on doors in the area to offer residents free psychological support.

In the first days after the explosion, residents were too busy seeking medical treatment or clearing debris from their homes. But as a kind of normality slowly returned, they seemed more ready to speak, said Noelle Jouane, director of the charity’s mental health programme.

“It helps relieve all of their anger,” she told AFP. But in the devastated district of Mar Mikhael, the slightest thud sparks alarm.

At the entrance to the neighbourhood, an old man was startled by the bang of a hammer against an iron plate. He immediately ducked and pressed his body against the hood of his car.

“It’s nothing,” a passerby reassured him.

Moments later, fear gripped the entire street, with people scrambling out after rumours spread that the August 4 blast site had once again caught fire.

Panic, fear, and in some cases a certain detachment from reality are among the “normal reactions to abnormal events,” said Rima Makki, the mental health activity manager for Doctors Without Borders (MSF) in Lebanon.