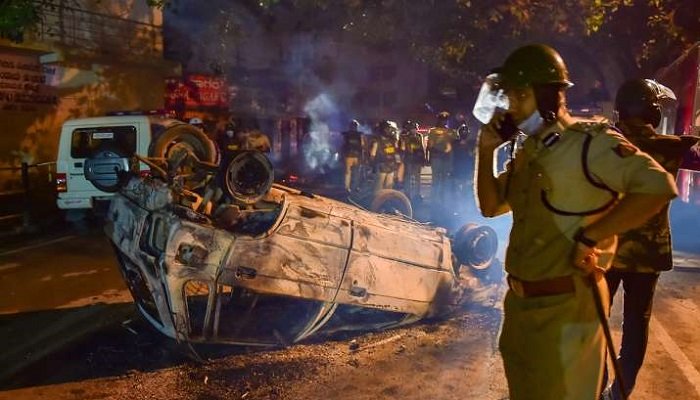 At least three people on Wednesday were killed during clashes with police in the Indian city of Bengaluru overnight over an anti-Islam Facebook post that sparked protests in which a police station was attacked, and a politician’s house and vehicles were torched.

Unable to quell protesters using batons and tear gas, besieged officers opened fire as they risked being overpowered during the violent unrest in a Muslim-dominated neighborhood, the southern city’s police chief told Reuters on Wednesday.

“Despite elders of the community trying to pacify the crowd, the mob burnt vehicles on the road, they attacked the police station,” Police Commissioner Kamal Pant said.

“The police had no escape and they had to resort to firing and three people died,” Pant said, adding that 110 people had been arrested for alleged vandalism and attacking the police.

A police official said an emergency law prohibiting gatherings had been imposed in Bengaluru, a city of 12 million people best known as India’s Silicon Valley.

“What was written…. is the working of a sick mind with an intention to create violence,” Congress Party lawmaker Dinesh Gundu Rao said on Twitter.

“It is highly objectionable and such statements about any person revered by any community needs to be handled in the strictest way possible by the authorities.”

Police gave the first name of the accused man as Naveen and said he is the nephew of another Congress politician, whose house was attacked and burnt in the violence.

The politician, R. Akhanda Srinivasa Murthy, appealed for calm in a video message carried by media.

“We’re all brothers. Whatever crime has been committed, let the law teach them a lesson,” Murthy said. “I appeal to our Muslim brothers and everyone else to maintain peace.”

Television channels on Tuesday night showed a group of people gathered outside a police station, clashing with officers and burning several police vehicles.

The videos showed the group later trying to force its way into the police station, and another group gathering outside the politician’s house shouting slogans, throwing stones, and setting fire to vehicles parked along the road.

“We are investigating the issue and will make use of the CCTV footage to see who is behind these violent acts, and will take stringent actions,” Basavraj Bommai, home minister of Karnataka state, told a news channel.