Johnny Depp’s terrifyingly brutal role in ‘Waiting for the Barbarians’: What you need to know 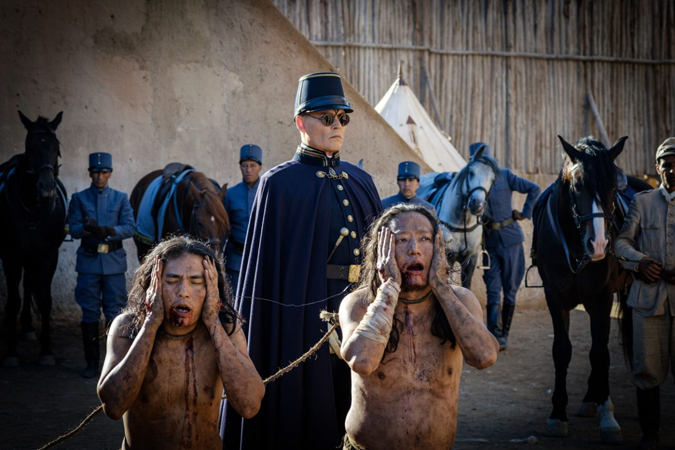 For Johnny Depp, the horrors are moving to the movie screen. As the superstar’s lurid libel case against Britain’s The Sun newspaper comes to a close after weeks of startling revelations about his life and toxic relationship with former wife Amber Heard, Depp’s torturous movie role in “Waiting for the Barbarians” is released Friday (on digital and VOD).

Depp’s brutal Colonel Joll is aided by thug-enabling Officer Mandel (Robert Pattinson) in conducting abusive interrogations and raids against “barbarians” in a fictional outpost overseen by the Magistrate (Mark Rylance).

Here’s what you need to know about Depp’s performance in the screen adaptation of Nobel Prize-winning author J.M. Coetzee’s 1980 novel.

This is no Tim Burton movie. Joll wreaks havoc among the peaceful indigenous people in the not-rated “Barbarians,” a searing political, anti-imperialism allegory.

“Pain is truth, all else is subject to doubt,” Joll dryly says of his ghastly interrogation methods. The fussy bureaucrat imprisons innocent people, torturing them in unspeakable ways. Much of this is featured unflinchingly by director Ciro Guerra.

After one expedition, Joll returns to the outpost with prisoners horrifyingly tethered together with a wire that runs through their hands and cheeks. Joll then extols the townspeople to take part in the torture, revealing a gleaming gold hammer for striking a victim. The hammer, taken from the novel, is the final straw for the Magistrate, who cries out, “No, not with a hammer, you would not use a hammer on a beast.” His imploring fails to stop the carnage. He’s imprisoned and tortured.

“Barbarians” runs for one hour, 54 minutes.

Depp’s sunglasses are not a Hollywood effect

Joll is introduced onscreen stepping out of his carriage with remarkably odd sunglasses, which immediately bewilder the Magistrate.

“They protect ones eyes from the glare of the sun, they keep one from squinting,” Joll explains in a clipped British accent.

Coetzee’s novel starts with a description of Joll’s glasses, which serve as an effective symbol to his situational blindness. The film’s wire glasses were designed “based on extensive research in the British Museum of glasses from every age and every part of the world,” producer Michael Fitzgerald tells USA TODAY over e-mail. “The ones we picked were otherworldly but not nearly as strange as some we saw.” During the “Barbarians” 2019 Venice Film Festival premiere, Depp said the glasses helped him to get into character. “They were threatening, they were menacing somehow,” he said during the film’s press conference. Joll and Mandel sport flowing capes and immaculate uniforms as members of the Empire’s powerful Third Bureau. “They are dark, crisp and precise,” says Fitzgerald. “Uniforms for bureaucrats and torturers. Believers who will gouge your eyes out but would much rather be at the opera in the capital.”

The ending is altered for screen, but doesn’t go well for Depp’s Joll

Joll’s blindness and terrible actions backfires on the Third Bureau, whose troops are slaughtered. In the novel, the Magistrate is able to confront the retreating Joll with the line, “The crime that is latent within us we must inflict on ourselves… not on others.” “Perfect on the page. But only on the page,” says Fitzgera. The film’s ending is slightly different, but emphasizes the same point with the utterly defeated look in Joll’s eyes.

Depp dominates the film’s credits with the most listings – his own sound technician and make-up artist, one executive assistant, two assistants (Rylance and Pattinson each had one assistant total) and two security team members.

But we haven’t heard much from Depp after he went to Venice to support the film’s world premiere. Perhaps due to his current legal situation, he has not done any promotion for “Barbarians.” His performance has received mixed reviews while critics have given the stunningly shot film 50% freshness rating on the aggregate site RottenTomatoes.com.